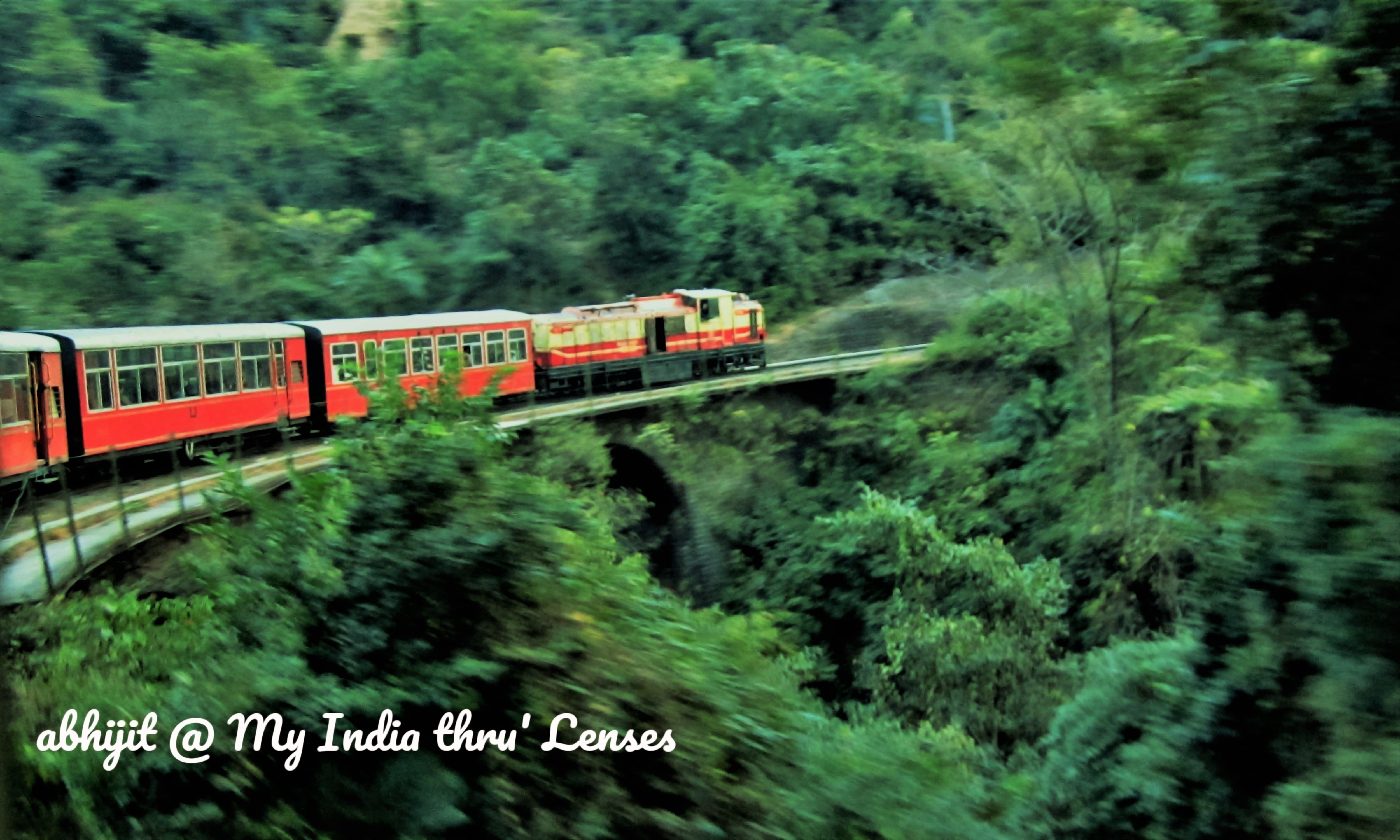 Most of the travellers will advise you for hiring a cab rather than availing the toy train to reach Shimla from Kalka. They are probably right in terms of duration of the journey, as it takes much less time when you travel by a cab (around 4 hours) than by the toy train (roughly 5-6 hours). Nevertheless, the Kalka-Shimla toy train ride is one of the fascinating train journeys in India – an experience to have at least once in the life time. The toy train passes through the picturesque mountains & valleys, beautiful oaks & pine trees, series of tunnels & bridges and few small streams & waterfalls providing you plenty of opportunities to press the shutter. 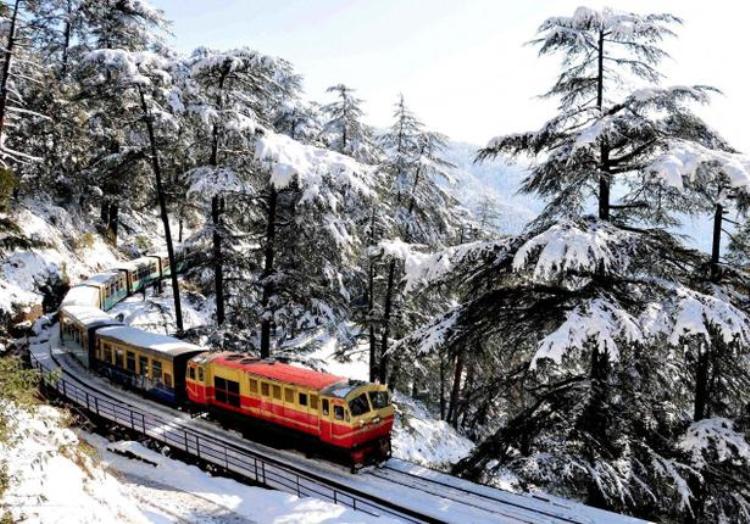 During snow fall in the Winters (PC - http://admis.hp.nic.in/heritage)

The Kalka-Shimla Railway was built during the British rule in India with the objective of connecting Shimla with the Indian rail network. In colonial India, the Shimla region got considerable political importance as the British government officials preferred residing in Shimla during the summers, because of its cold & healthy climate. Thus, Shimla became the Summer Capital of the British and the question of connecting it to the Delhi region became crucial. Construction of the Kalka-Shimla Railway track started in 1898 by the then Delhi-Ambala-Kalka Railway Company. H.S. Harington was the Chief Engineer of the project. The line was inaugurated on 9th Nov 1903 by Lord Curzon, the then Viceroy of India. The estimated cost for the project was around Rs. 86 Lacs in those days, which got escalated to almost double during construction. In 1906, the railway was bought by the British Government for an approx. amount of Rs. 1.70 Crore (as on 1906). The Kalka-Shimla Railway was considered the “crown jewel” of the Indian Rail network during British times.

At present, it is operated by Indian Railways under the Government of India. The rail route holds the Guinness Book of World Records for its 96-km steepest rise in altitude with crossover of 800+ bridges and 100+ tunnels. In 2007, the Himachal Pradesh Government declared the Railway a Heritage Property. UNESCO conferred World Heritage status to Kalka-Shimla Railway in July 2008 listing it under “Mountain Railways of India”.

KEY FACTS AT A GLANCE

Shivalik Deluxe Express (52451 UP / 52452 DN) is probably the best train in terms of timing as well as facilities. It starts in the early morning (5.45 am) from Kalka. It is connecting train for the Howrah-Kalka Mail (12311), which reaches Kalka station at 4.45 am. Howrah-Kalka Mail passes through Delhi (Old Delhi railway station) around 9.30 pm and thus it is also a convenient train to reach Kalka from Delhi overnight and catch Shivalik express in the morning. (The timings keep on changing and it is advisable to check the latest time-table from the IRCTC website) 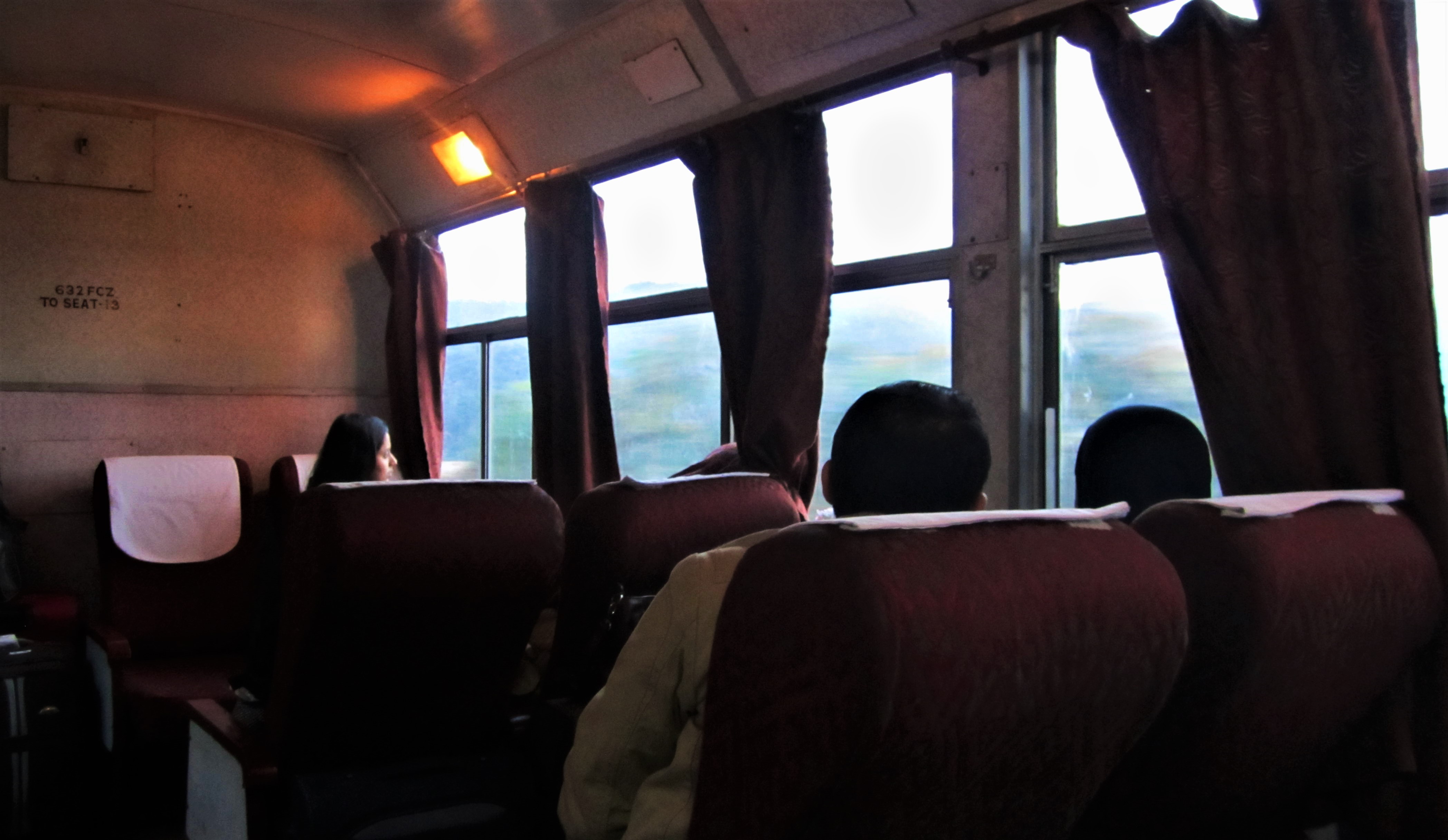 During our journey, the Howrah-Kalka Mail reached Kalka at 6:00 am (late by more than 1 hour). We were nervous, but found Shivalik Express, being a connecting train, waiting for us. We entered into our coach. It was small, nice and cosy. All the coaches are equipped with reversible cushioned chairs, foldable table for serving food, wall-to-wall carpeting and wide glass windows. 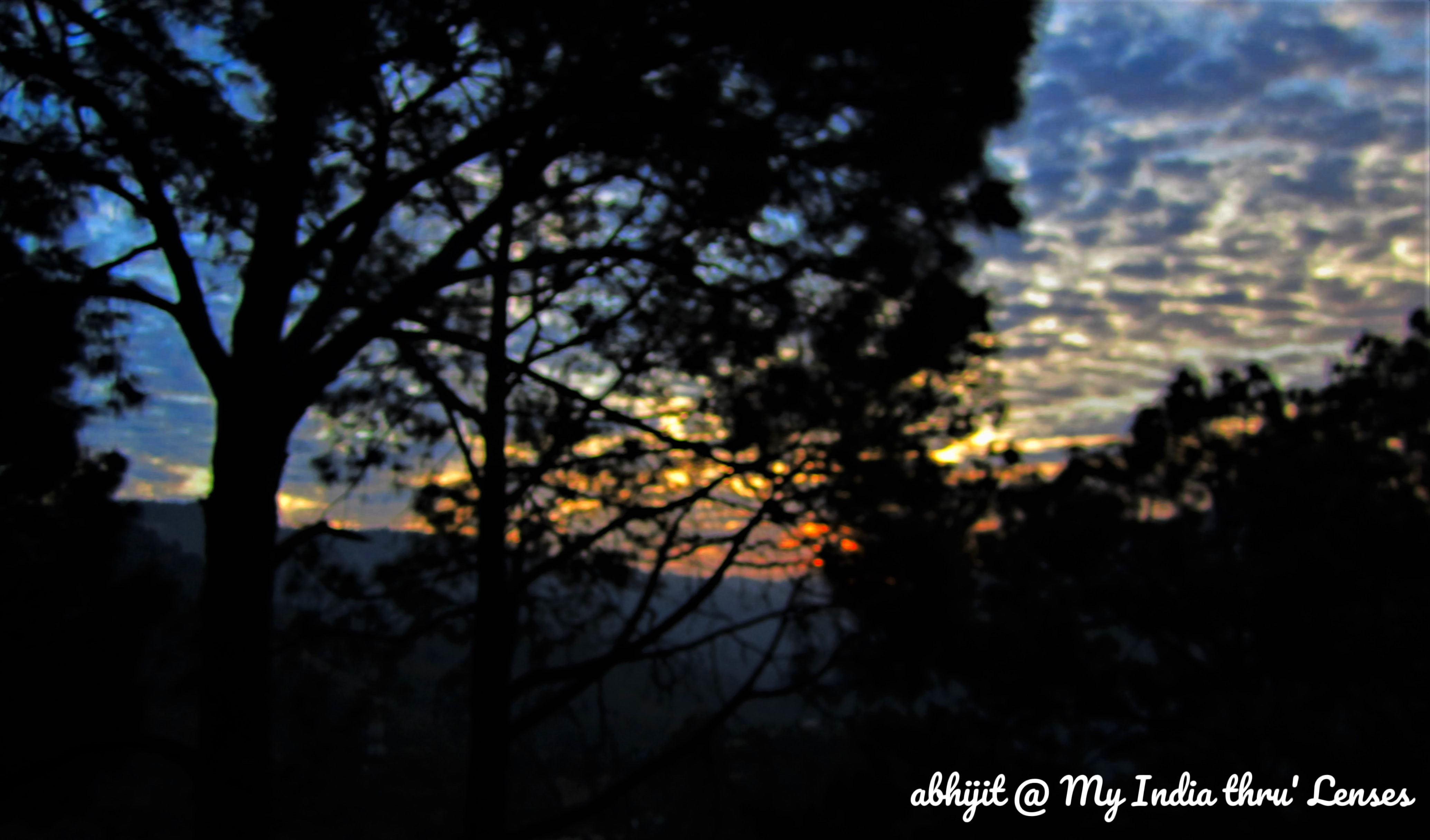 When we boarded the train at Kalka Station, it was dark outside as the sun was yet to rise (our trip to Shimla was during the winters). After 10-15 minutes of departure, we observed a spectacular sun rise from the train. The train also started to climb the hill by then. 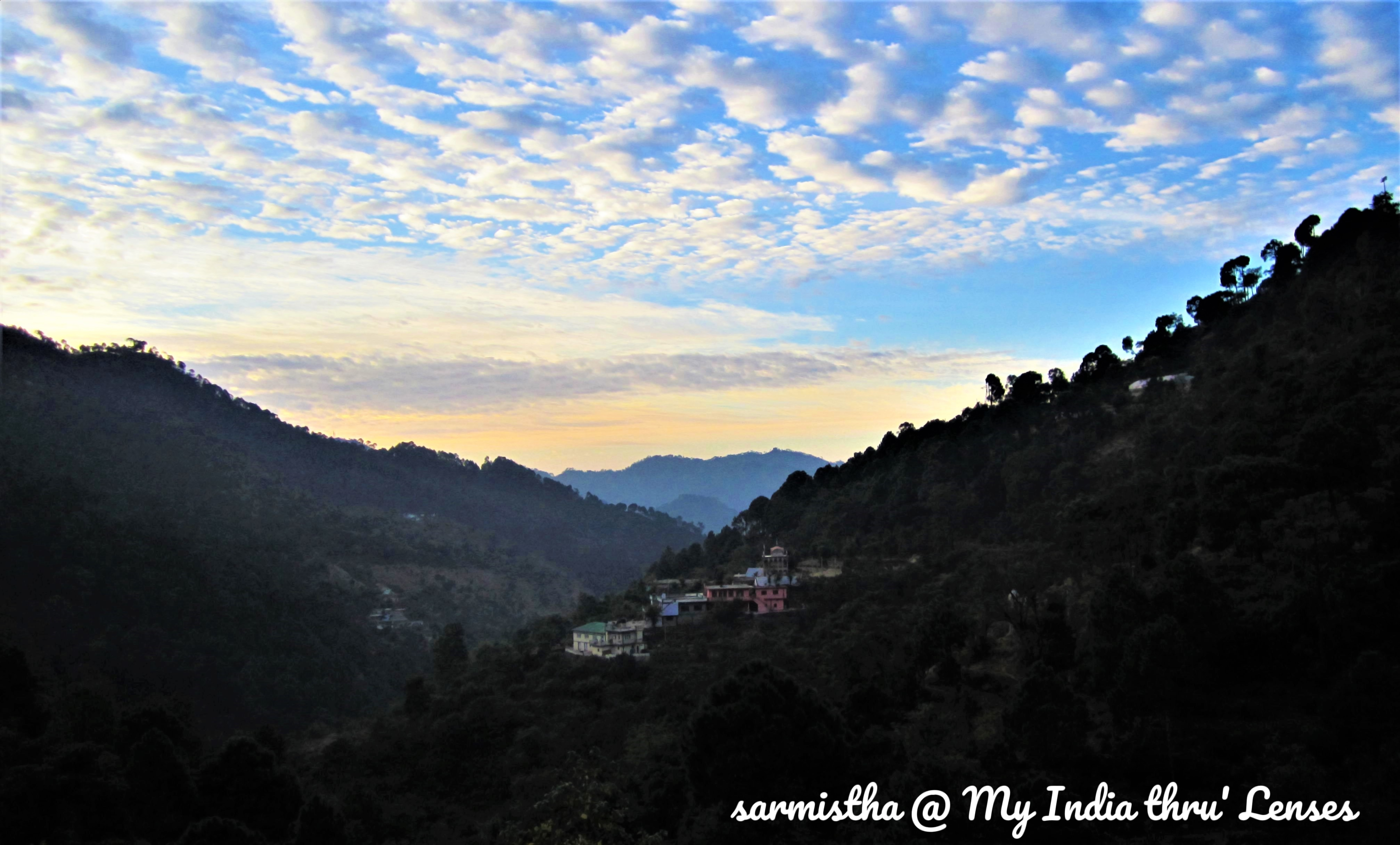 While the train was picking up speed, we got busy in capturing the awesome views of the mountains and valleys from the glass windows of the compartment. Most of the time during the journey from Kalka to Shimla the valley falls on the right side of the train. So, you are lucky if you get the seats on the right side. 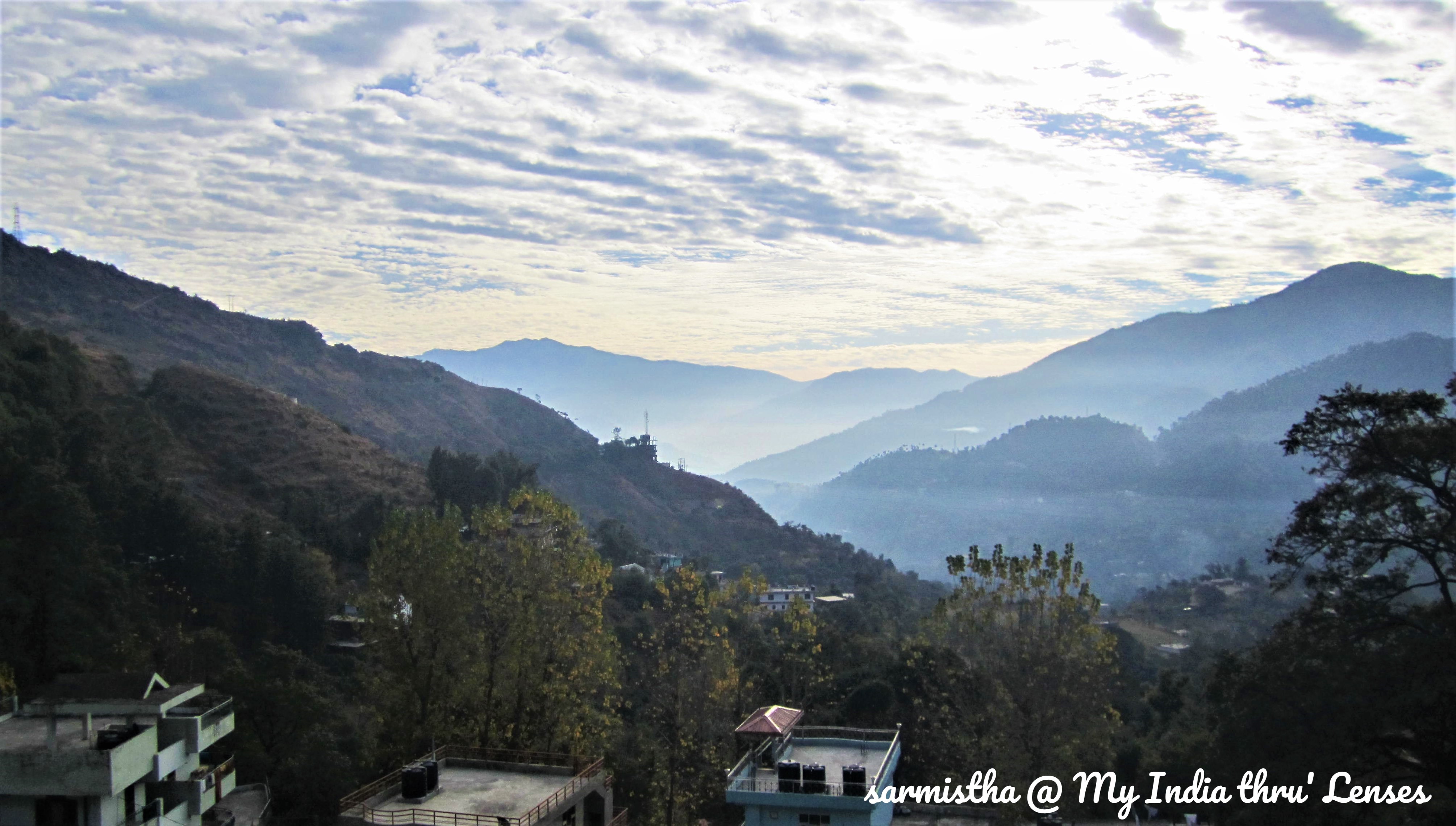 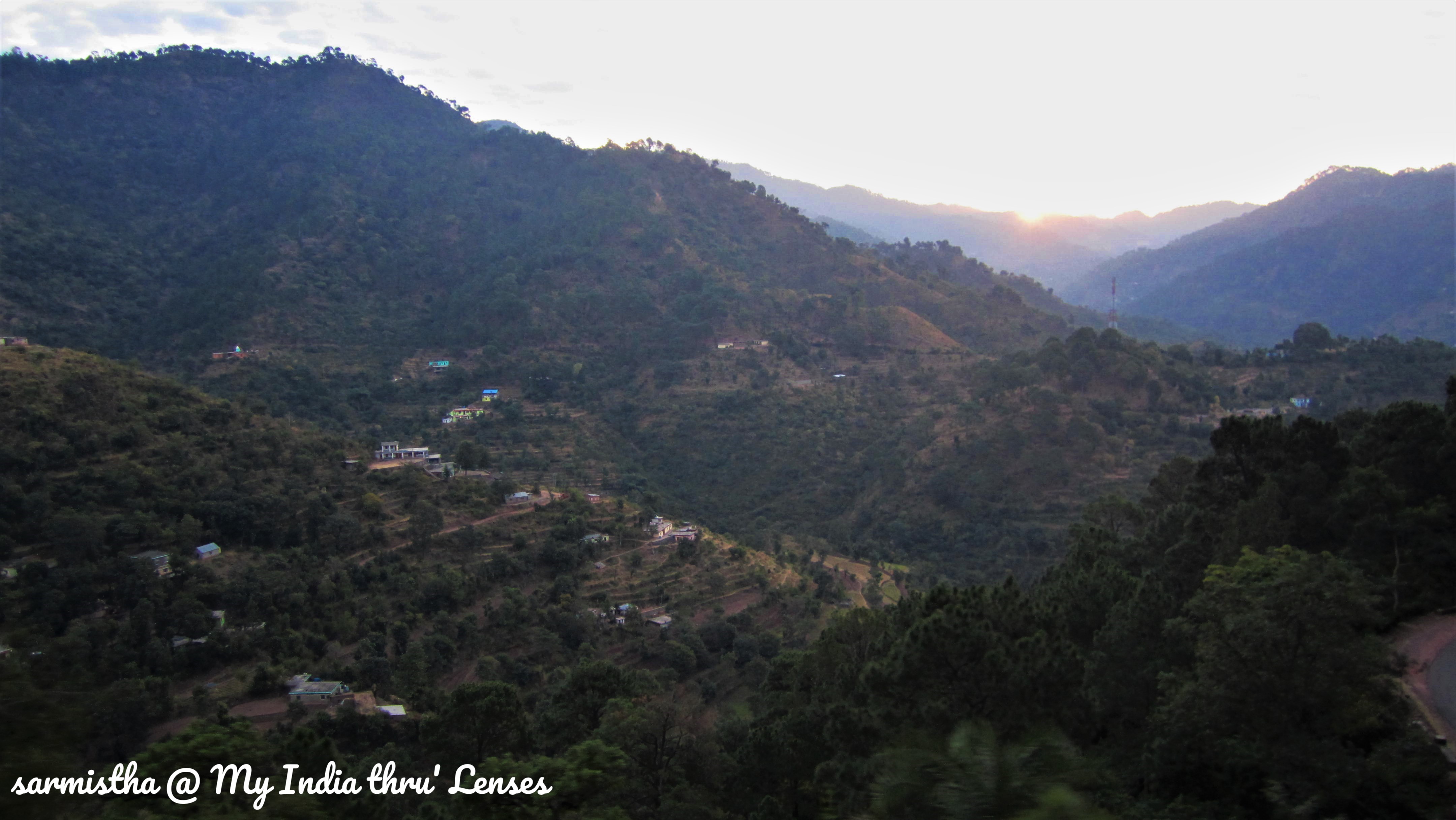 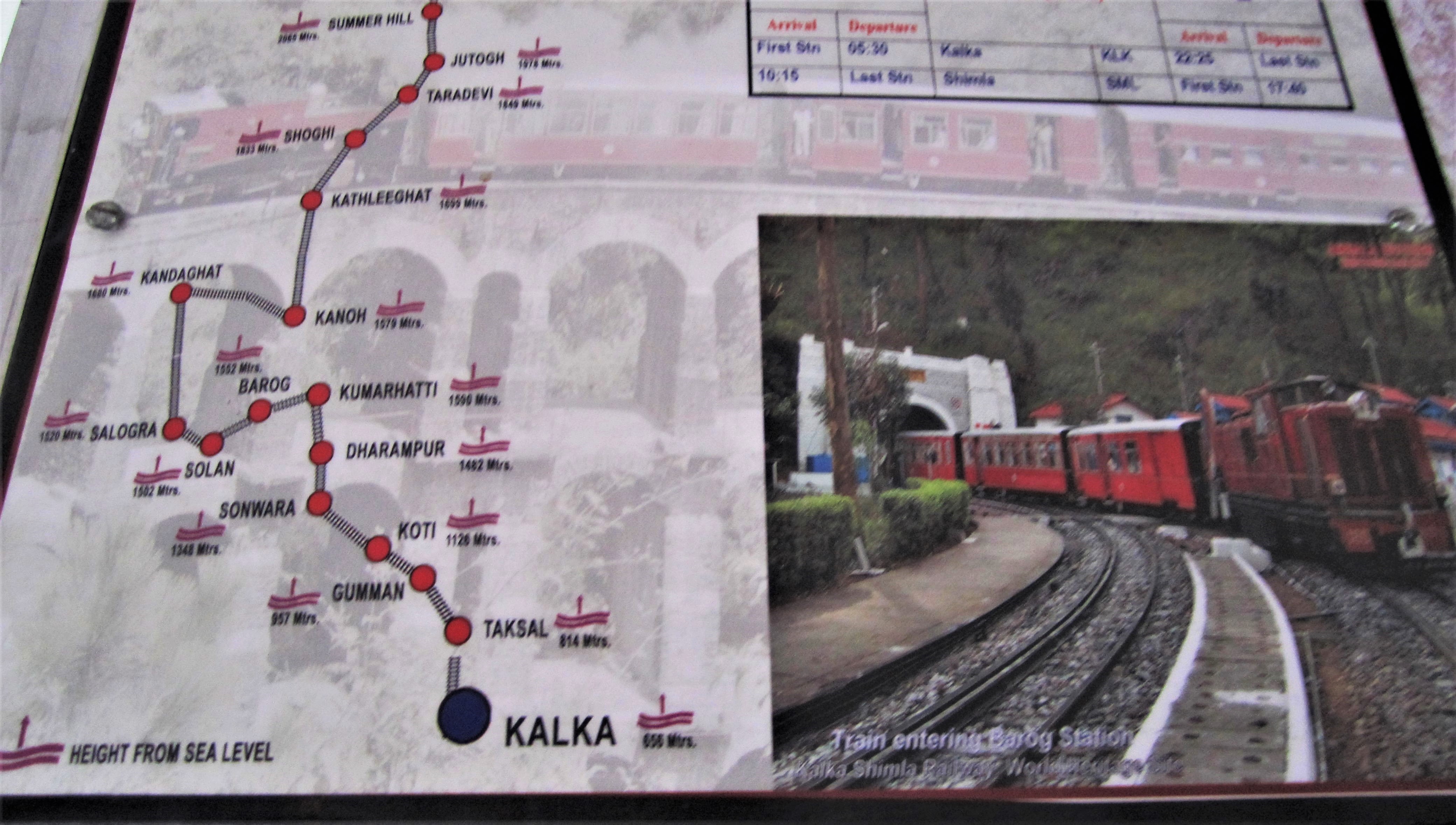 A map inside the compartment displaying the stations in the Kalka-Shimla train route. Barog, Solan (Solan Brewery), Kanoh, Taradevi are a few important stations to mention. Shivalik Express does not have any official stops between the journey, other than Barog station, where food packets are loaded to the train. The breakfast is complementary in the upward journey (Kalka to Shimla) and dinner is included in your ticket in downward journey (Shimla to Kalka). If required you can book extra breakfast before the Barog station on payment. It was a memorable experience to have breakfast while passing through the beautiful valleys, tunnels and bridges. 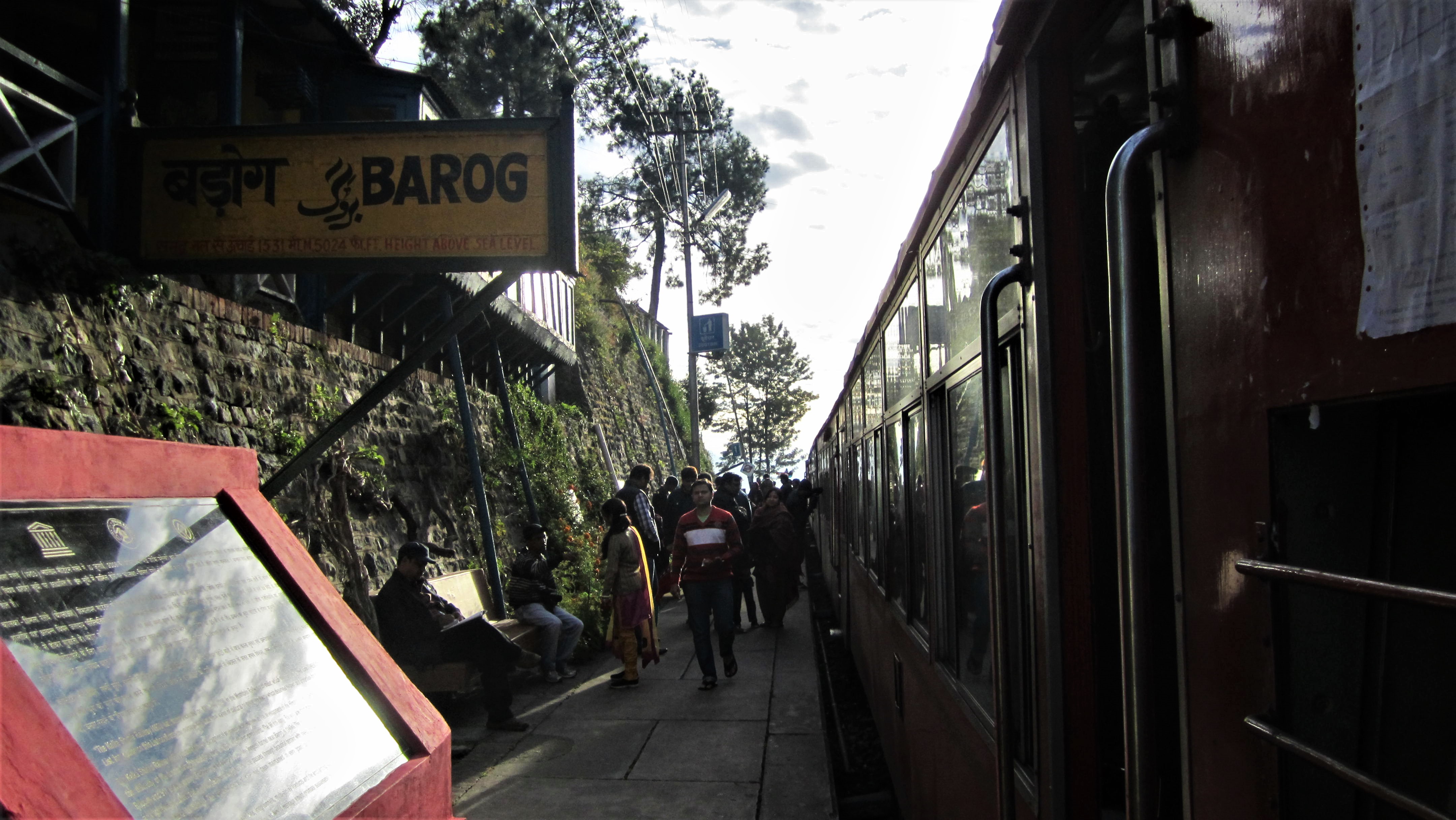 The train at Barog Station.  Barog is 42.1 kms from Kalka at a height of 1531 m above MSL. The train reaches the station around 7.15 am and stops for quite a while. You may choose to get down and have a cup of tea. The station is named after Colonel Barog, the British engineer who was in charge of building the Barog Tunnel.

Barog tunnel (tunnel no. 33) is the longest (1143.61 m) of all the 102 operational tunnels on the route. Considering an average speed of 25 kmph, trains take about 2.5 minutes to cross this tunnel. The construction of the tunnel was completed during the period 1900 – 1903. There are a few folklores related to Barog Tunnel & Colonel Barog, which are popular among the locals since long. Let’s digress a little bit here to read two short stories, which are mix of facts & myths:

THE TRAGIC STORY OF COLONEL BAROG

British India, 1900 CE. The construction of the Kalka-Shimla Track was going on full swing. Colonel Barog, a British engineer, was in charge of digging the tunnel. Under his supervision, digging started from both the ends (digging tunnel from both ends is a common practice adopted by the civil engineers to make the process faster). When work was mid-way, the engineers discovered an alignment problem i.e. the tunnels already dug from the two ends would never meet at the centre. This occurred probably because of some miscalculation or some error during execution. British government fined Colonel Barog Re 1 as punishment for improper implementation of project and wasting government money. Feeling humiliated, Colonel Barog went into depression and ultimately committed suicide inside the tunnel itself. He was buried near the incomplete tunnel. The work was then assigned to Chief Engineer HS Harrington. The incomplete tunnel was abandoned and a new tunnel was built.

Since then, it has been a common belief among local people that Colonel Barog’s spirit roams in and around the abandoned tunnel, which is very close to the new one. More than 100 years have passed after the incident, but the locals and even many travellers still speak about sighting his ghost in the area.

THE LEGEND OF BABA BHALKU

This is another popular folklore related to Barog tunnel. After the tragic incident of Colonel Barog, the project was assigned to Harrington, who along with his team members, continued to struggle with the same problem of alignment. Then Baba Bhalku, a saint, happened to come there from somewhere else and showed a method to solve the problem, which was completely unexplainable. He would just strike the rocks of the mountains at different places with his stick and hear the sound. Listening to the sound pattern, he could instruct the British engineers where to dig the hole to proceed further. He was hired by the department to do the same for rest of the tunnels. The British Government honoured Baba Bhalku Ram by presenting him a medal and a turban. 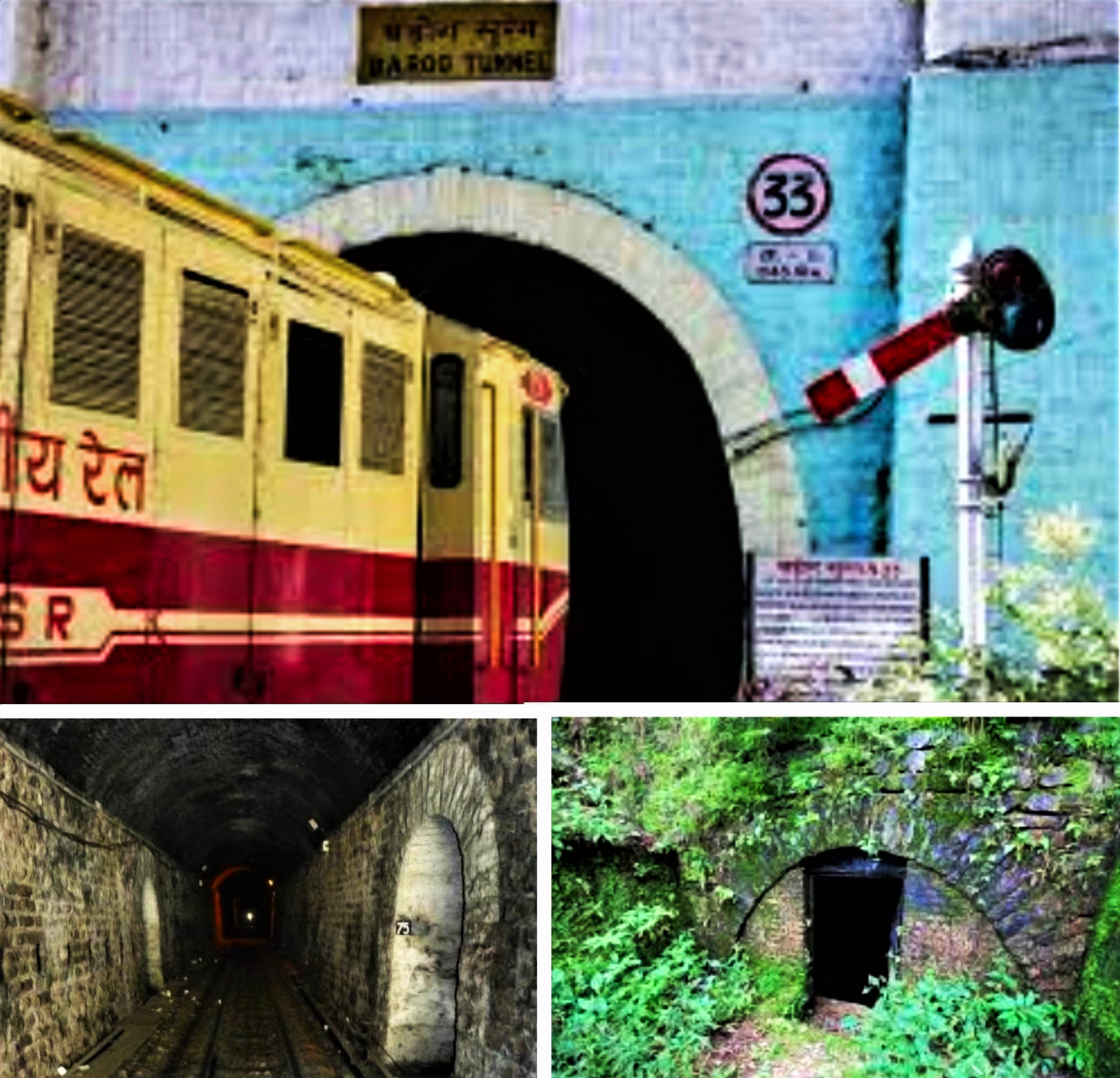 TOP: Train entering the famous Barog Tunnel (Tunnel no. 33). BOTTOM-LEFT: Inside view of the Tunnel. BOTTOM-RIGHT: The old unfinished tunnel, that was abandoned after the tragedy. The Barog Tunnel comes just before the Barog Station during the upward journey. The tunnel was world's longest (at the time of construction, 1900-1903). Obviously, it doesn’t come even in the list of ‘20 longest tunnel’ in present days. It is also one of the straightest tunnels of the world. You will find several newspaper articles, blogs and You tube videos on Barog tunnel and related folklores, such as, India’s most haunted tunnels, Myth of Barog etc. 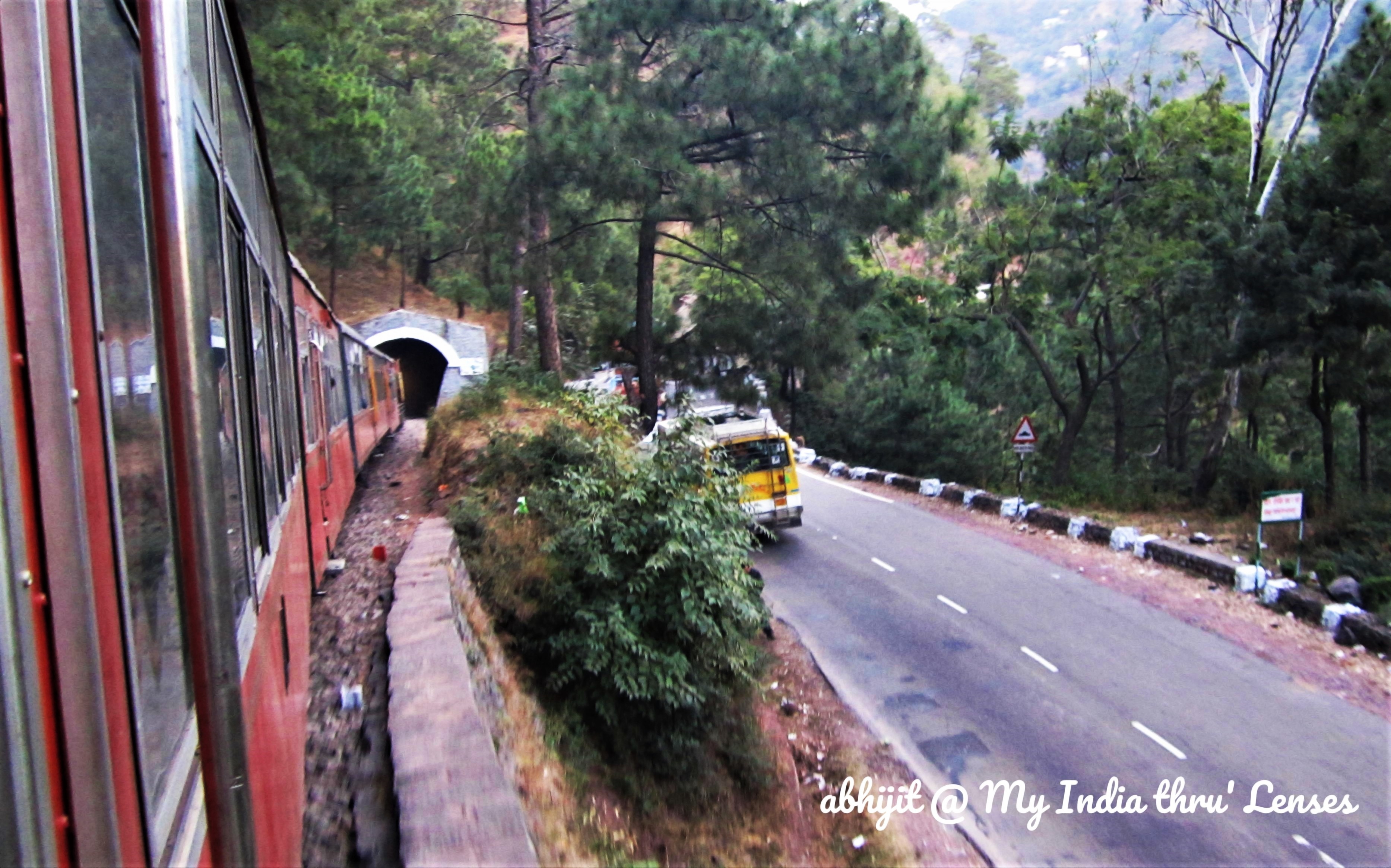 The train entering another tunnel while losing the race with a bus. The Kalka-Shimla Road keeps on disappearing and reappearing for the entire journey - a number of times you will find it running parallel to the Rail Track. 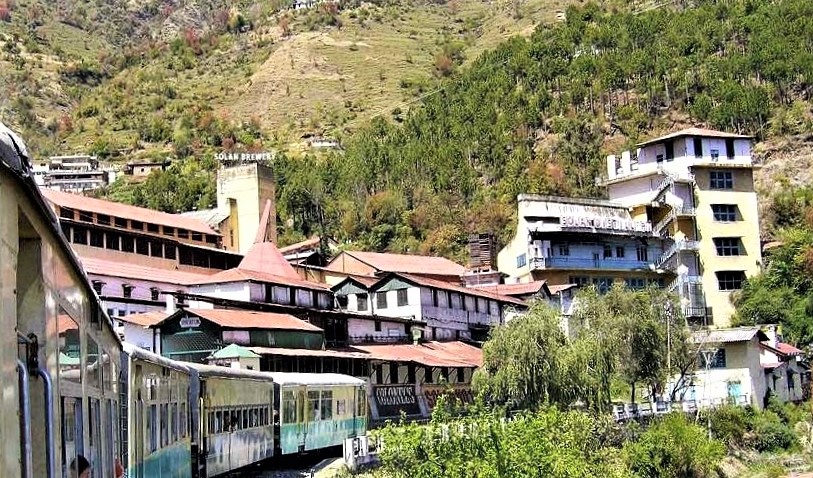 Solan is the next station to Barog. Solan Brewery is located very close to the railway station. Started long back in 1855, Solan Brewery is one of the oldest breweries in the country. It has now been converted into a distillery. Founded by Edward Dyer, an Englishman, the brewery is currently run by Mohan Meakin Ltd. (PC – www.holidify.com) 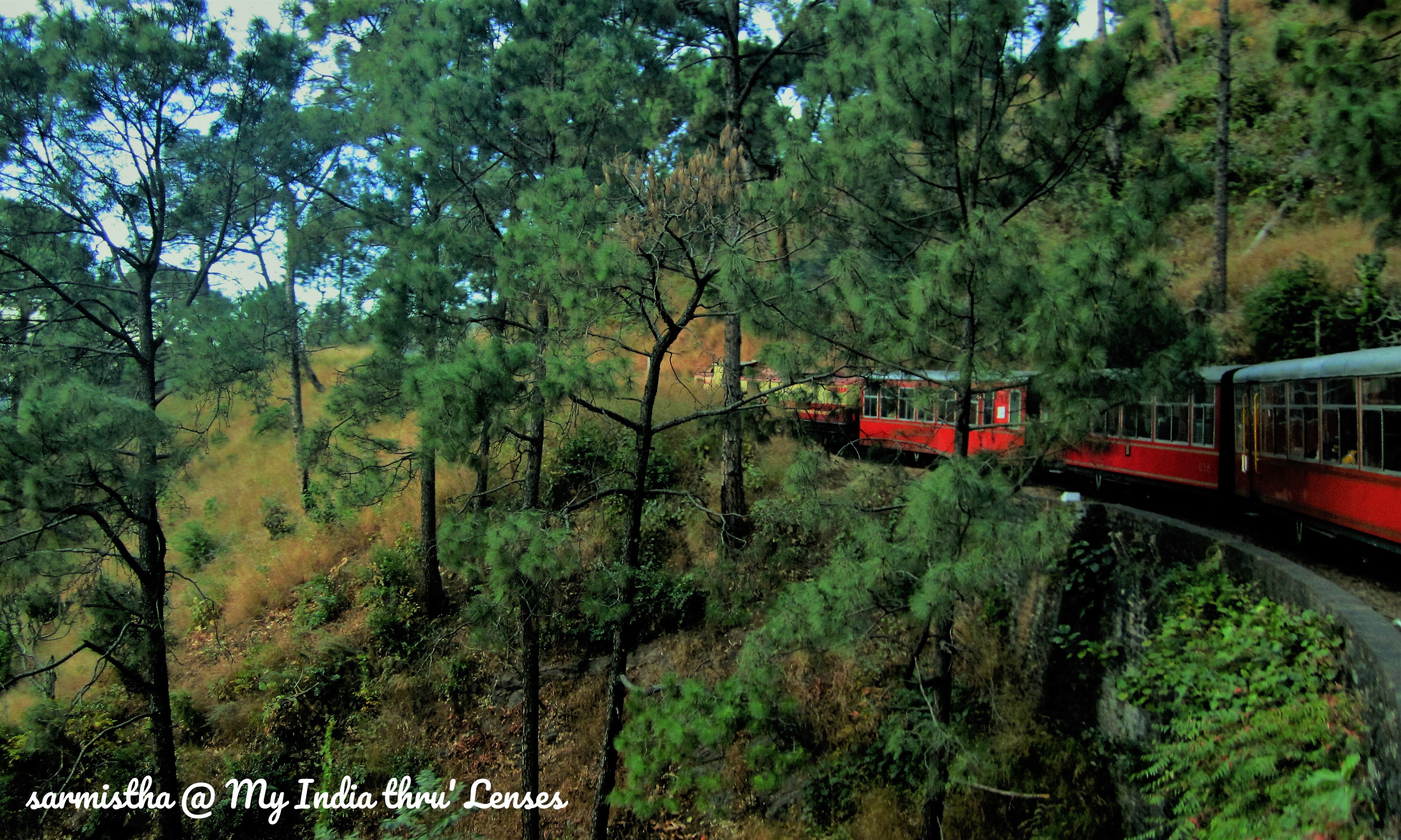 Spoken enough on the tunnels! In addition to 102 tunnels, the Kalka-Shimla route includes 864 bridges of various lengths & heights. Majority of them are Arch Gallery Bridges and are testimonies of brilliant engineering skills employed 100+ years back. Bridge no. 493 is an excellent Arch Gallery Bridge (32.0 m in length and 16.4 m in height) that you should not miss. The most important is, however, the Kanoh Bridge.

The Kanoh Bridge (Bridge no. 541): A multi-arch gallery bridge situated near Kanoh station, which is about 64 kms from Kalka. Built in 1898, the Kanoh Bridge is still the highest arch gallery bridge on Indian Railway networks. The bridge is 52.90 m long, 23.00 m high and has 34 arches. It includes 4 storeys (tiers) of arch galleries, each with different configuration of arches, track on a steep gradient with a 48-degree reverse curve. The bridge is a unique example of excellent mix of civil engineering techniques and use of economical local construction material (stones & lime mortar) for building such a sturdy and solid abutment that is bearing the load of the trains for 120 years. Fascinating, isn’t it?

Let’s again talk a bit on the beautiful landscapes. The most spectacular sceneries occur after the train crosses Barog. Specially, after crossing the Kanoh bridge, the last 30 kms of the journey is fabulous. The speed of the train is greatly restricted as the gradient becomes steeper, however, this allows for plenty of fascinating sightseeing and landscape photography along the way. 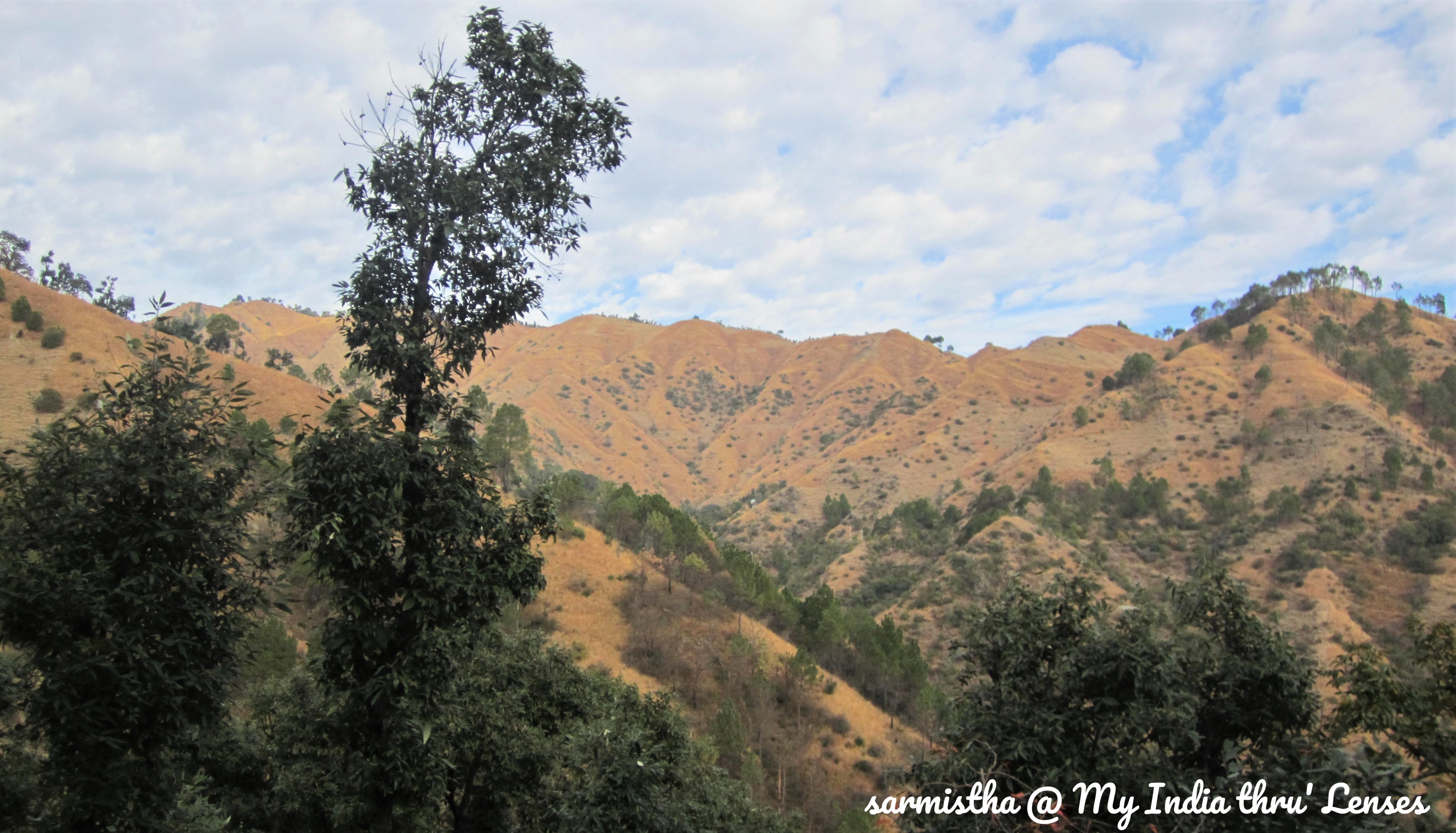 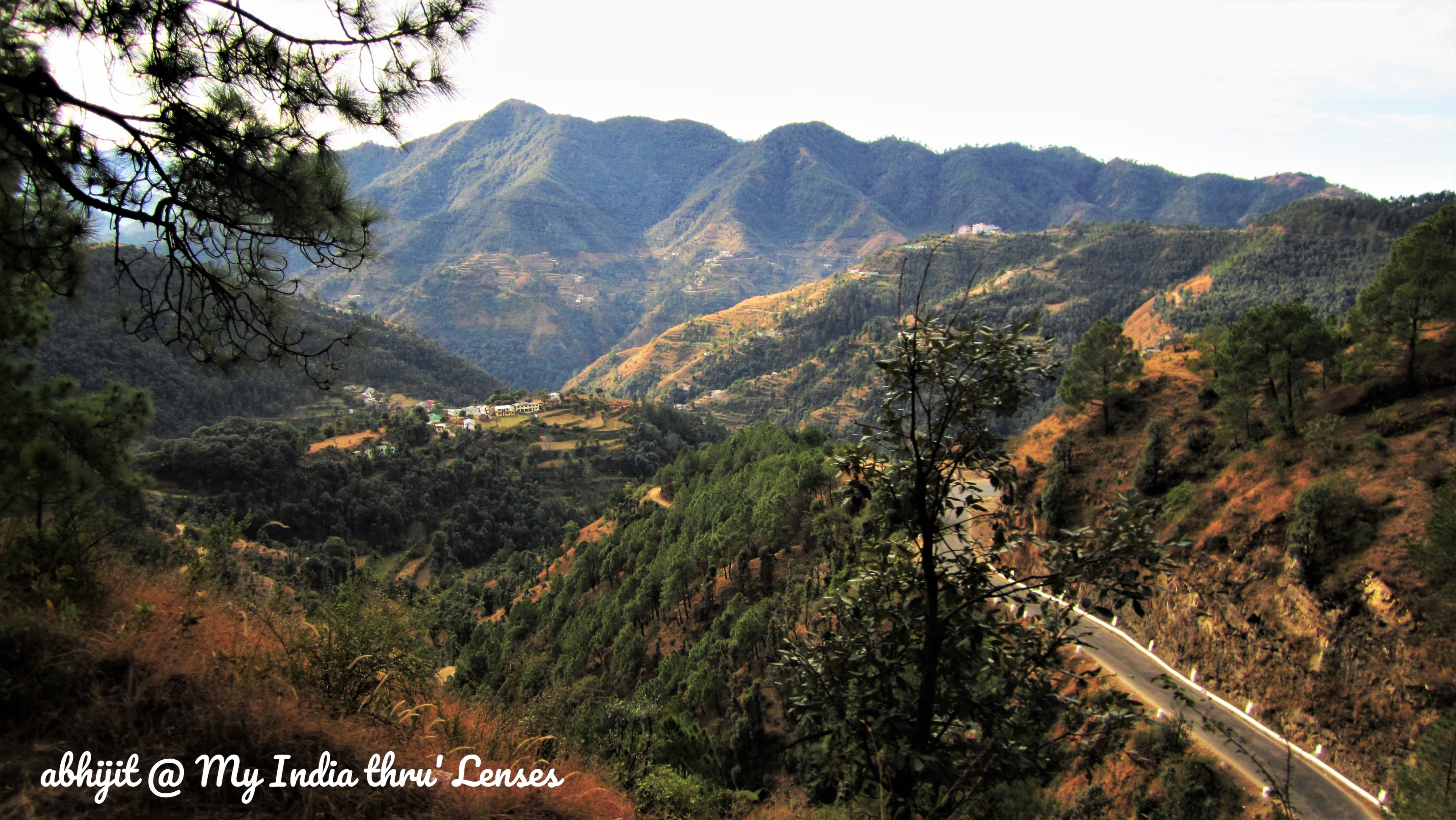 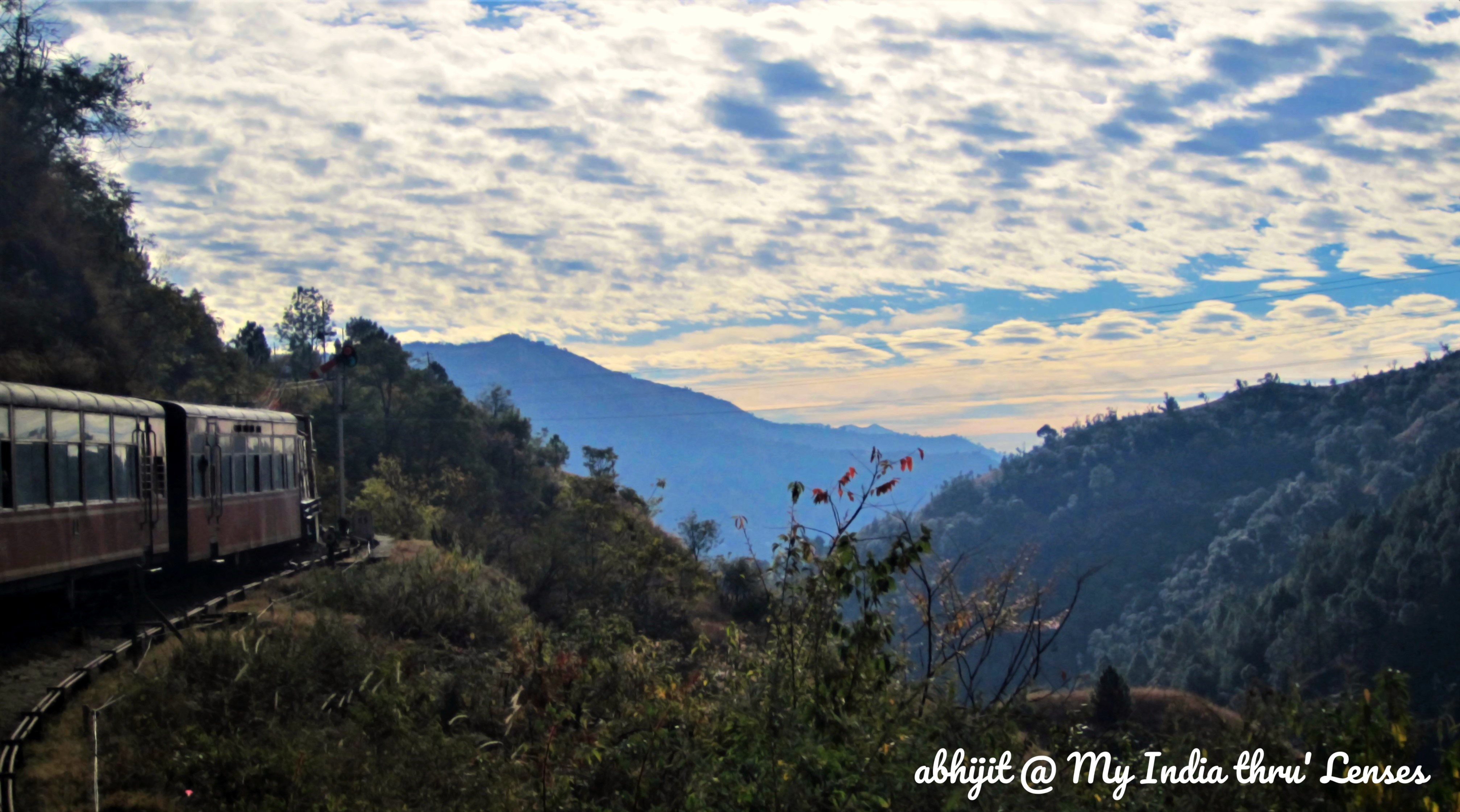 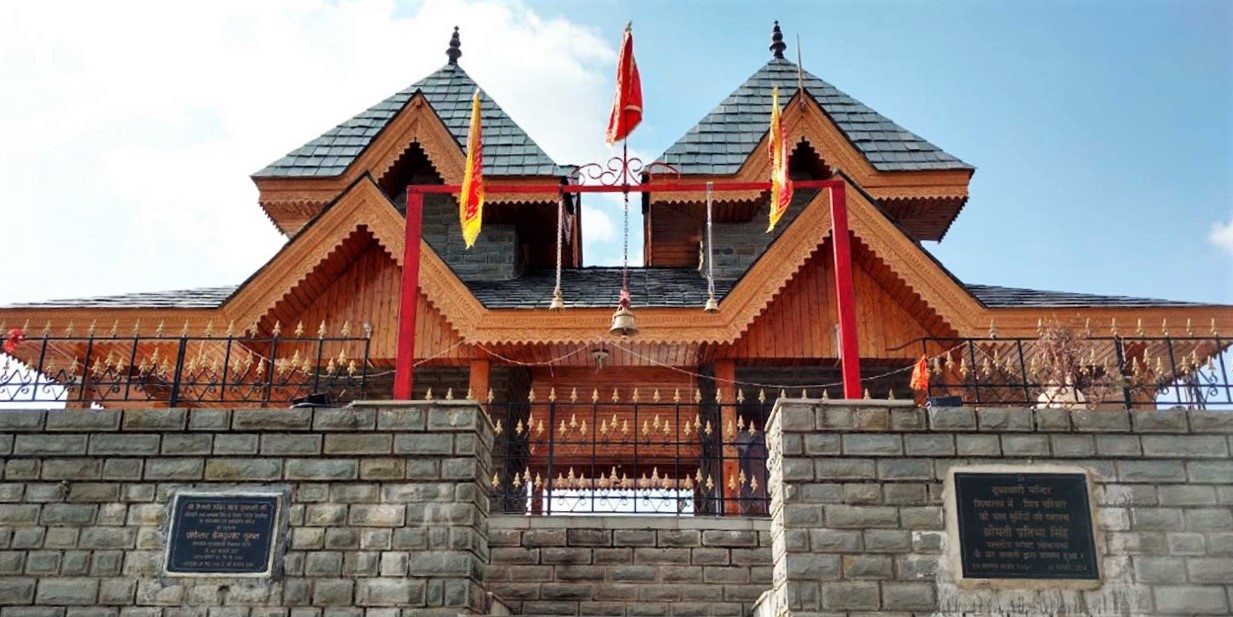 Taradevi (84.6 kms from Kalka, 12.0 kms from Shimla / Height 1936 m above MSL) is an important station. It is a famous pilgrim place. The name has been derived from Mata Tara Devi. The famous temples of Tara Devi & Sankat Mochan are situated in the vicinity of this station. As this place is only 12 kms from Shimla, you may choose to come back here hiring a cab during your Shimla sightseeing. (PC – www.shimlatourism.co.in) 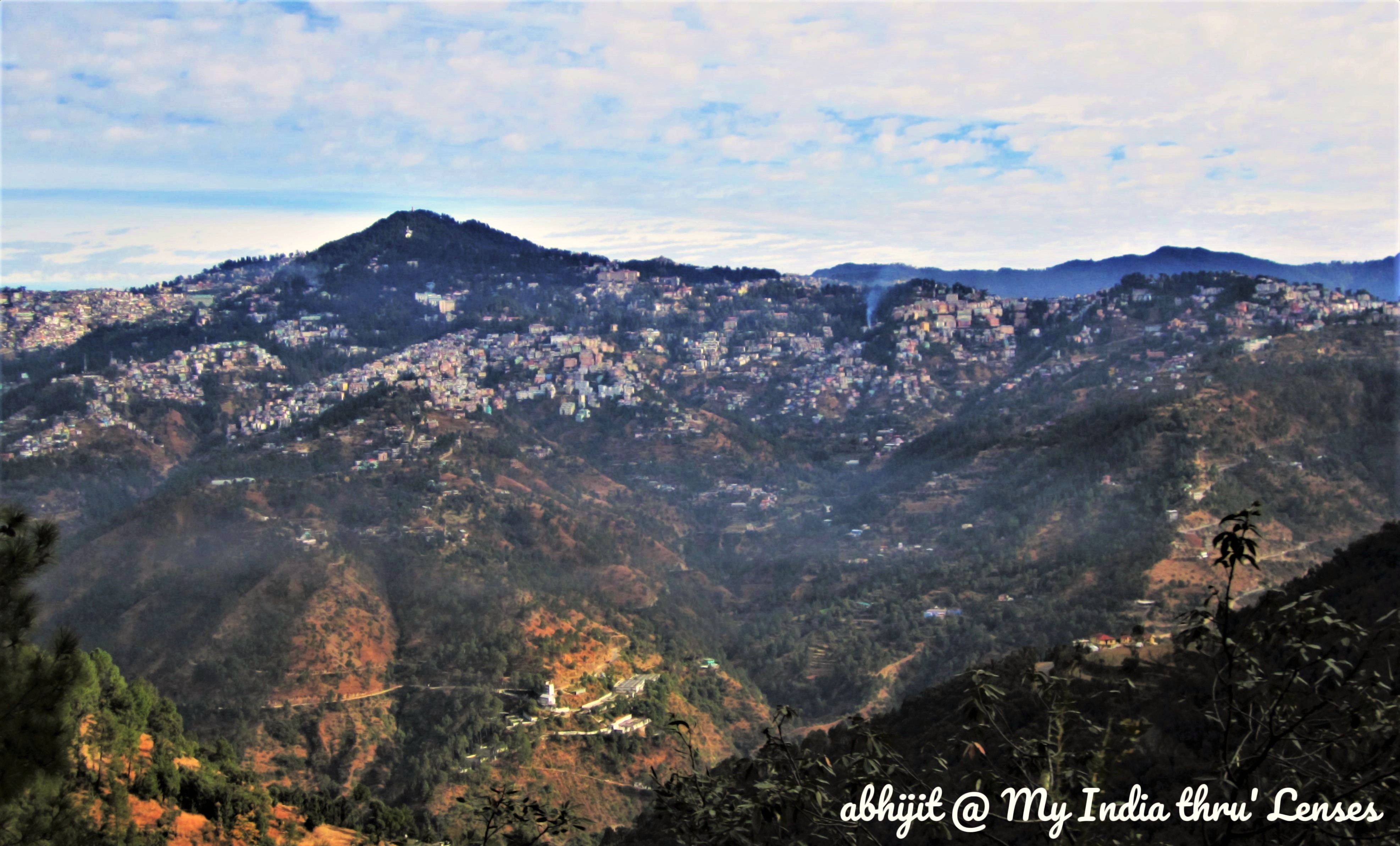 The view of Shimla from the toy train. Another 30 minutes or so to reach the destination… 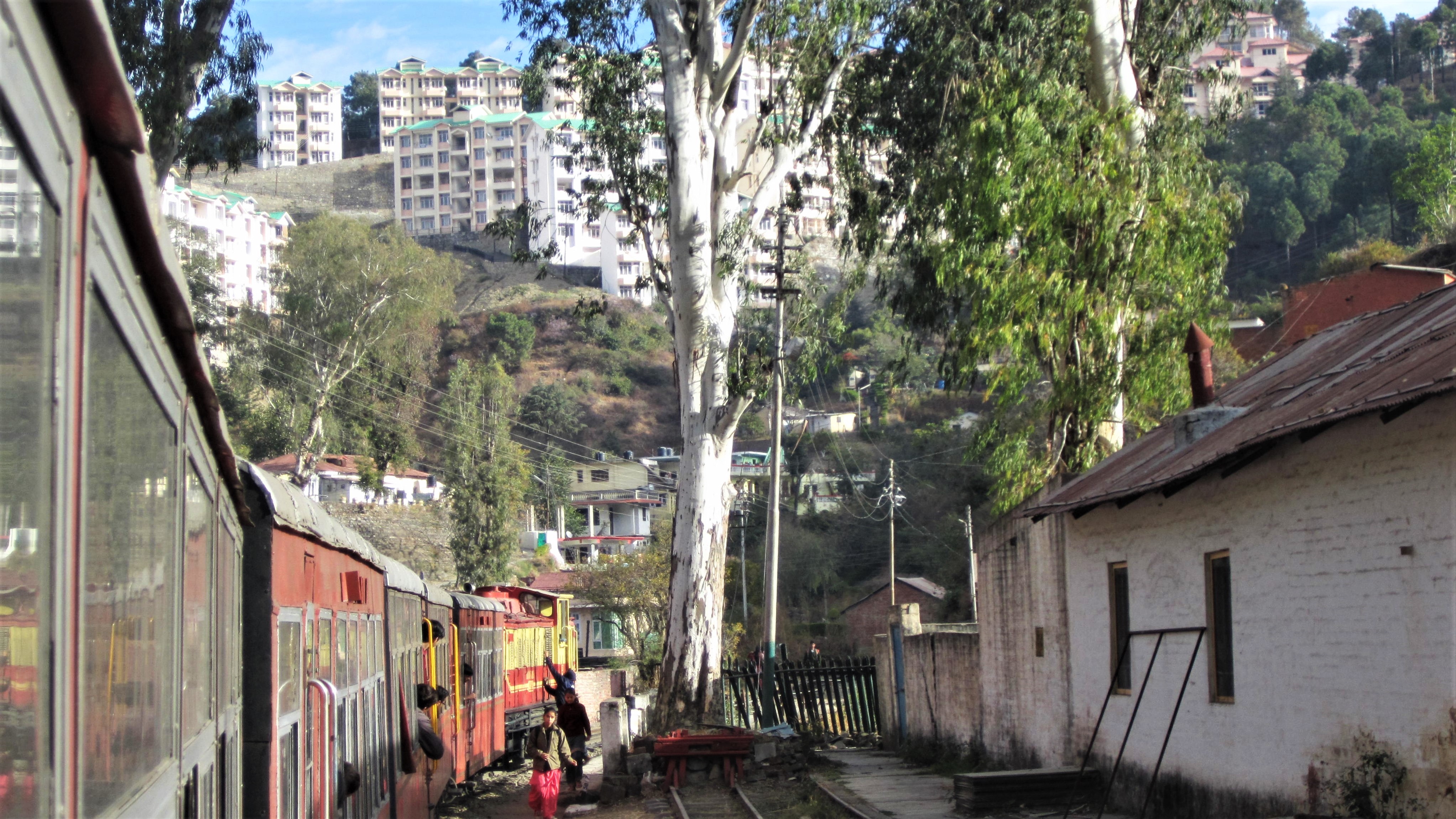 We are almost in. A brief wait before entering the Station. 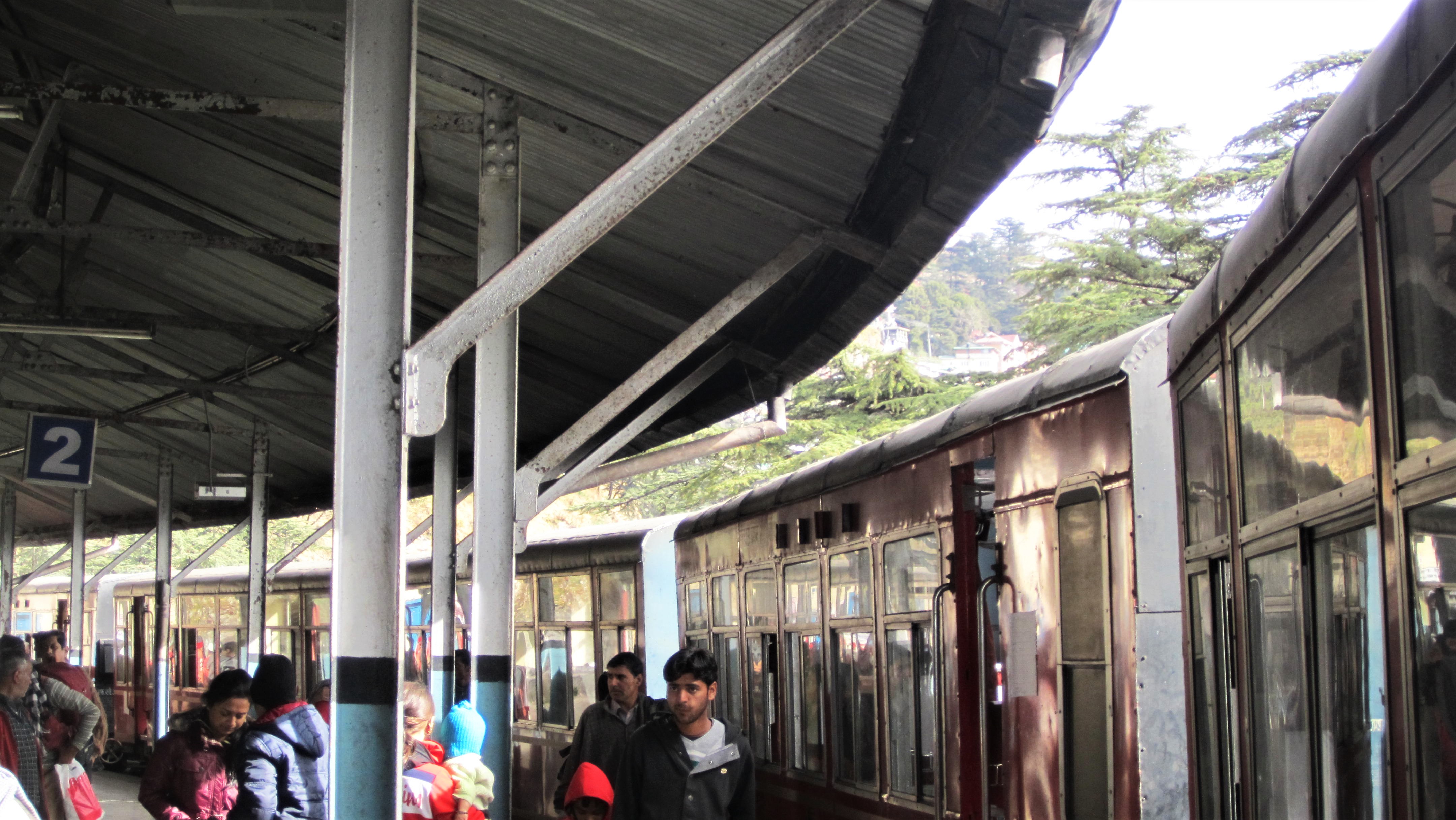 The awesome journey came to an end by 11 am as the train reached Shimla Station. People who travelled by cab might have reached 2 hours before us, but have missed this life-time experience. We hired a taxi outside the station and reached our hotel comfortably by 12 noon. The remarkable experience of the Kalka-Shimla toy train ride was indeed a great way to start our Shimla tour.

TRAIN INFORMATION FOR THE TOURISTS

It is, however, highly recommended to check the updated time table and fare information from IRCTC website as these change frequently. 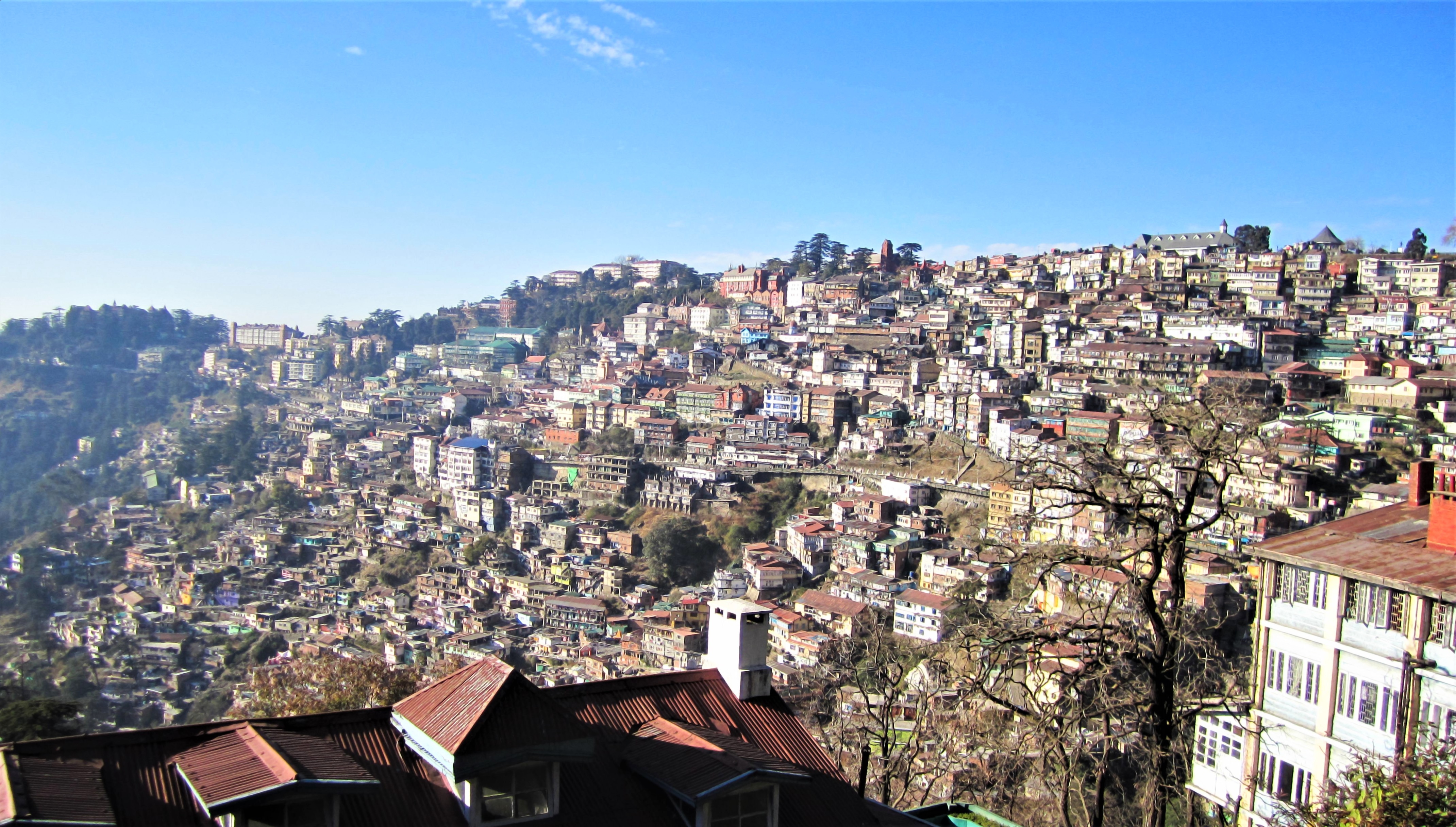 Photographs, unless otherwise credited, are self-captured.