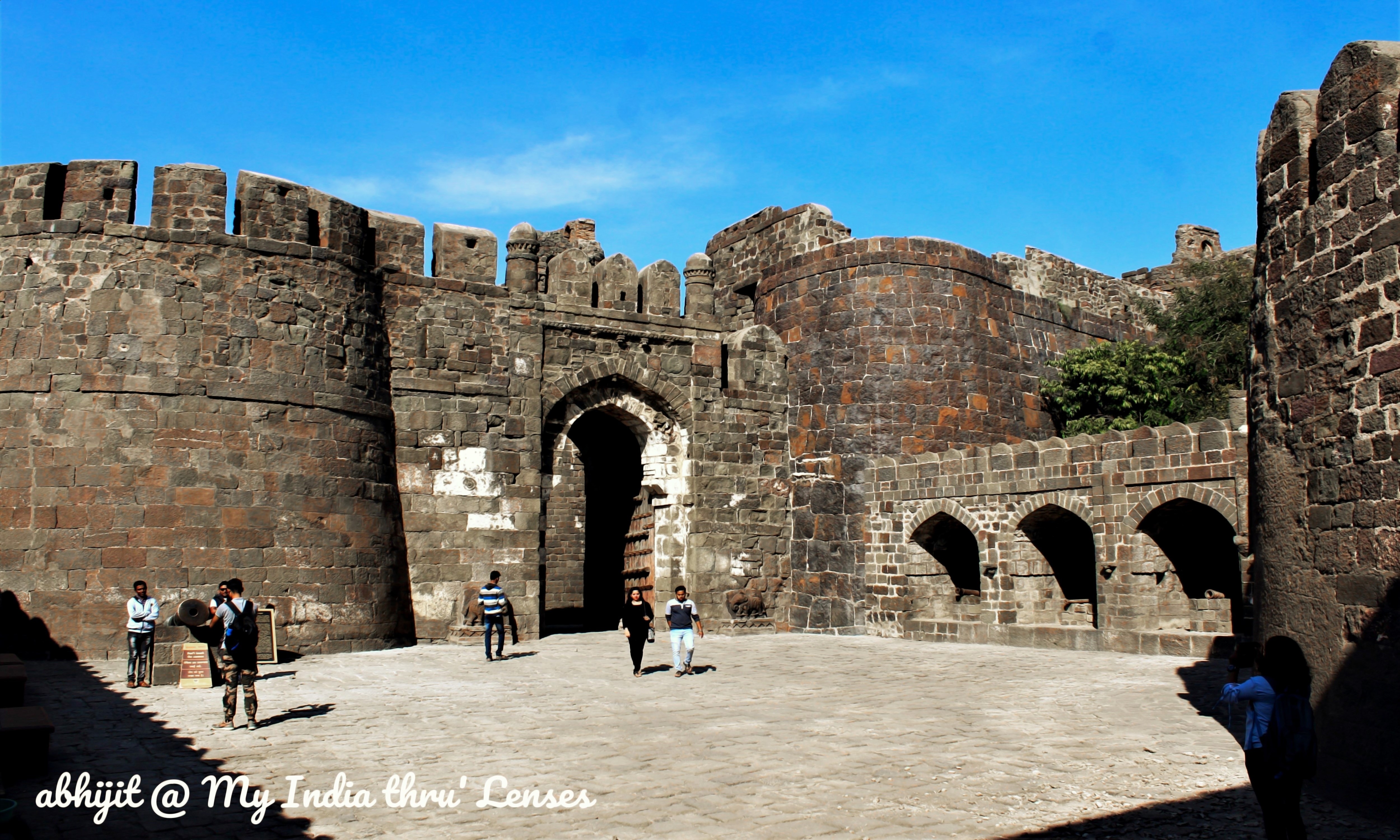 This is the 2nd part of the Article on Daulatabad Fort, the 800-year-old fort of medieval deccan having a remarkable history. Because of its strategic location and extra-ordinary defence system, the fort was almost invincible, nevertheless, its possession was carved by most powerful dynasties ruling between 12th – 18th century, such as, Khiljis & Tughlaqs of Delhi Sultanate, Bahamani rulers, Mughals, Marathas and finally the Nizams of Hyderabad. Ownership of the fort was a matter of pride, prestige and might for the kingdoms of medieval India. The following sections briefly highlight the history of Daulatabad Fort starting from its construction in the 12th century.

Read the travelogue -> Part I: Exploring the Invincible Daulatabad Fort

THE OLD CITY OF DEVAGIRI

The earliest records reveal that Devagiri was a small settlement that lied on an important caravan route for the travellers. There is a belief that Devagiri city was built by a herdsman who acquired vast wealth by his good fortune. He had a brother who was a shepherd named 'Raja Ram' and in correlation with it he assumed the rank of a Raja (King). This, however, doesn’t have substantial historical base.

‘Devagiri’, literally meaning ‘Hill of the Gods’, was also used to be called as the ‘City of Fortune’. Much later in 1328 CE, ‘Devagiri’ was renamed as ‘Daulatabad’ (meaning ‘Adobe of Wealth’) by Sultan Mohamad bin Tughlaq. As evident from the names, Devagiri was a city that flourished and became famous for its wealth, roughly 1000 years ago.

As per historical records, the city of Devagiri was founded by Yadava king Bhillama V (1173 – 1191 CE), the first important king of sovereign Seuna Kingdom, who led victorious campaigns against the Hoysalas, Paramaras and Chalukyas of Kalyana. In 1187 CE, Bhillama built a rock-cut fort to the protect the capital city Devagiri from foreign invasions. Strategic location and superior defence system made Devagiri Fort almost impenetrable in an era when use of gunpowder was unknown in India. The city of Devagiri remained capital of the Yadava dynasty for a little more than 100 years until 1296 CE, when Ala-ud-din Khilji invaded Devagiri. 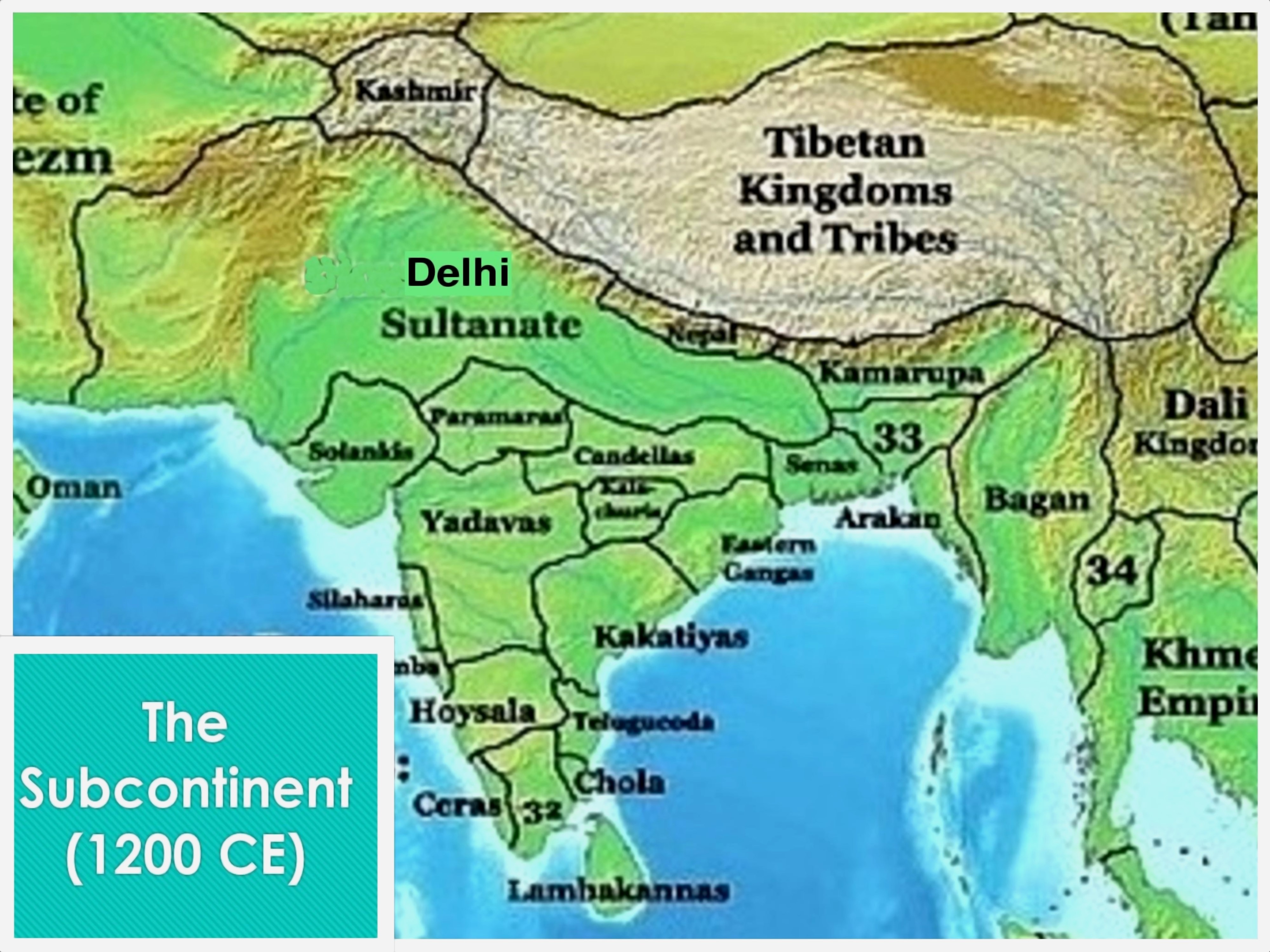 Indian Subcontinent in 1200 CE, showing the Yadava Dynasty and its neighbours (PC - https://wikivisually.com/)

The formidable defence system of the fort and absence of any outside attack for a long period made the Yadavas too complacent. The rulers as well as the people of the kingdom were detached from the outside world, as Henry Miers Elliot writes in his epic work ‘The History of India as Told by Its Own Historians (Vol III)’: “The people of that country had never heard of the Musalmans…the land had never been punished by their armies. No Musalman king or prince had penetrated so far.”

When Ala-ud-din raided Devagiri for the first time in 1296 CE, he was the Governor of Kara, one of the provinces of Delhi Sultanate under Sultan Jalal-ud-din Khilji. Ala-ud-din was lured by the wealth of Devagiri and kept his march to Devagiri secret from his uncle Jalal-ud-din, because he intended to use the wealth acquired from the raid to dethrone the Sultan.

With a virtually non-existent intelligence system, the Yadavas were grossly underprepared to face Khilji’s attack. In fact, Kanhan, one of the vassals of Raja Ramachandra Deva, the then Yadava king, had fought a pitched battle with the Turkic army and had almost defeated it before Ala-ud-din’s superior tactics outwitted him, and yet the news of this battle did not reach Devagiri. Further, major portion of the Yadava army was away on an expedition led by the crown prince Simhana. In fact, Devagiri had neglected the most basic commodity required to survive a siege – food. The towering fort had a capacity to store a three-year supply, but during the siege, the defenders were shocked to discover the thousands of sacks stored in the granary contained not grain but salt.

While the Turkic army plundered the lower part of the city, Ala-ud-din spread a rumour that it was only a small portion of his army and a 20000-strong cavalry was yet to arrive. The aged king Ramachandra pleaded for treaty, however, before the treaty could realize, Simhana returned to Devagiri and challenged Ala-ud-din. Leaving inside a 1000-strong cavalry under Nusrat Khan, Ala-ud-din led the rest of his men to fight against Simhana. Larger in size, the Yadava army managed to push the Turkic army into backfoot in the initial part of the battle. All of a sudden, Nusrat Khan led his small army to the battlefield, which the Yadavas mistook as the rumoured 20,000-strong cavalry and fled from the battlefield in panic. Ala-ud-din returned to the fort and carried out a mass slaughter. It is said that he made close relatives & nobles of Ramachandra parade in front of the fort. A dejected Ramachandra again pleaded for a peace treaty. 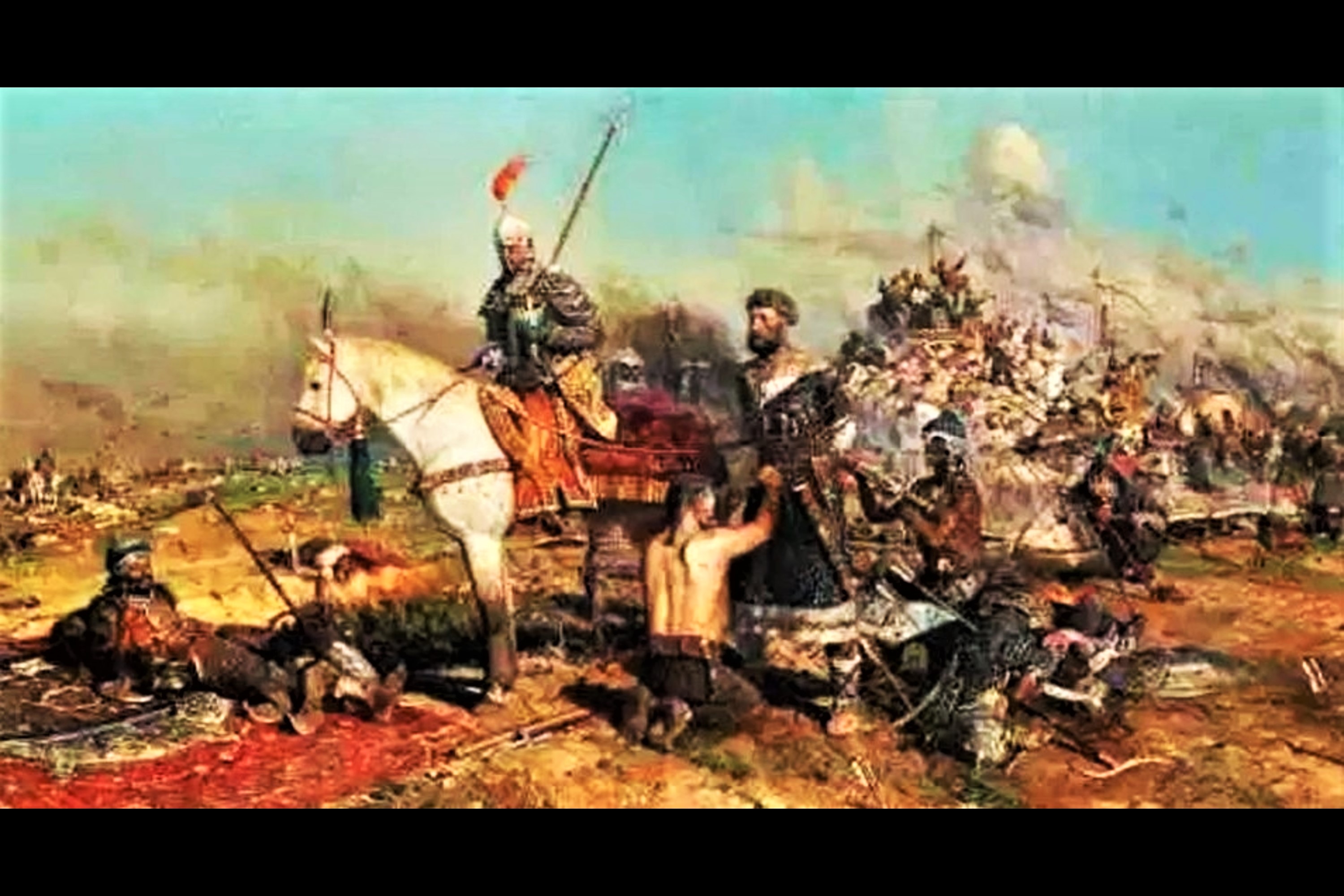 This time, Ala-ud-din’s demand was much larger. According to Ziauddin Barani, the looted wealth was so much that even after being squandered by Ala-ud-din's successors, a large part of it remained till the reign of Firoz Shah Tughlaq, who ascended the throne approx. 50 years later. 16th century historian Firishta quantified the wealth as 600 mann gold, 1000 mann silver, 7 mann pearls, 2 mann precious stones and 4,000 pieces of silk & other items (mann was a unit for measurement of weight in medieval India, 1 mann being close to 37 kgs). It is said that Ala-ud-din also took princess Jhatyapali, daughter of Ramachandra Deva, back to Delhi with him. Many of us, who have watched the Bollywood movie Padmavat, can recall the brief scene of the first siege of Devagiri by Ala-ud-din.

Soon after the siege, Ala-ud-din killed his uncle Jalal-ud-din and himself became the Sultan. Later, in 1306-07 and 1312, Malik Kafur, Ala-ud-din’s most trusted general, led armies against the recalcitrant Ramachandra Deva and his son Shankar Deva successively, subdued them and killed the latter. Malik Kafur placed Harapala Deva on the throne of Devagiri.

A few years later, when Harapala Deva declared his independence, Ala-ud-din’s son Qutb-ud-din Mubarak Khilji attacked Devagiri and annexed the same to the Delhi Sultanate, which marks the official end of Yadava dynasty.

Tughlaq dynasty succeeded Khilji dynasty in the Delhi Sultanate. Sultan Mohamad bin Tughlaq renamed Devagiri as Daulatabad and ordered an en masse shifting of the capital from Delhi to Daulatabad in 1328 CE. He took the decision primarily to keep his capital safe from Mongol invasions and also to have a better control over the Deccan. However, very soon trouble broke out in Bengal as well as on north-western India. Tughlaq realized that while his new capital was distant enough to be safe from Mongol invasions, it was also too far away to protect northern India. So, the “Sultan of Swing” re-ordered his people to return to Delhi. Thousands of people perished in the process of this transfer and re-transfer. 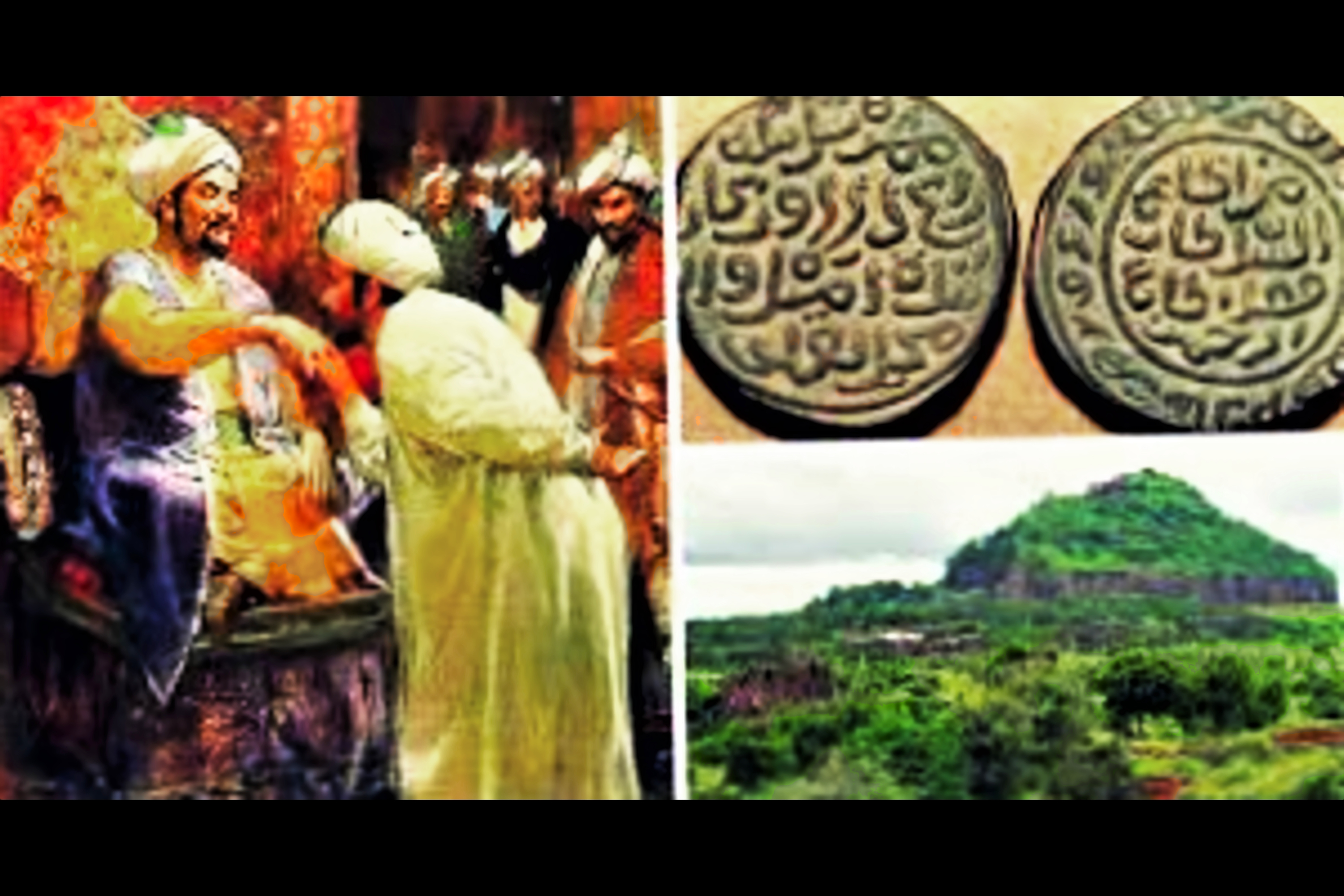 Two of the boldest administrative experiments of Mohamad bin Tughlaq were: the introduction of token currency system with copper & brass coins and shifting of capital from Delhi to Daulatabad for a certain period (PC - www.thebetterindia.com)

DAULATABAD UNDER THE BAHMANI SULTANS OF THE DECCAN

A few years later, through a quick succession of political events, the area was wrested from the imperial authority by Hasan Gangu (aka Zafar Khan), one of the lieutenants of Mohamad bin Tughlaq. Zafar Khan took the name Ala-al-din Bahman Shah and was enthroned as the first ruler of the independent Bahmani dynasty (1347 CE). Under the Bahmani kingdom (1347–1527 CE), the Daulatabad Fort became more formidable with added ramparts, a steeper scarp and a massive ditch at the base of the fortress. It was of great strategic importance in guarding the northern frontier of the Bahmani state against the rising power of the post-Tughluq regional states, viz. Malwa and the Gujarat Sultanate. However, the political focus of the Bahmanis slowly shifted southwards as the Hindu kingdom of Vijaynagar (1336–1646 CE) became their new arch-rival. Bahmanis shifted their capital to Gulbarga.

UNDER THE NIZAM SHAHI DYNASTY

By 1499 CE, Nizam Shahi rulers of Ahmednagar captured Daulatabad and made it a part of their kingdom. In the next 50 years there was a huge political development in north India – the Delhi Sultanate ended and the mighty Mughals came into power. Mughals, after consolidating their power in the north India, started their campaigns in the south. This led to a series of wars between the Deccan Sultans and the Mughals under Akbar, Jahangir & Shah Jahan. To bolster their defence, the Nizam Shahis shifted their capital to Daulatabad in 1607 CE.

CAPTURE OF DAULATABAD BY THE MUGHALS

In 1633 CE, during the reign of Shah Jahan, Daulatabad was finally captured by the Mughals after prolonged siege of four months. The Mughal Governor imprisoned the Nizam Shahi prince Husain Shah. This was the key victory that consolidated Mughal power in the Deccan region. 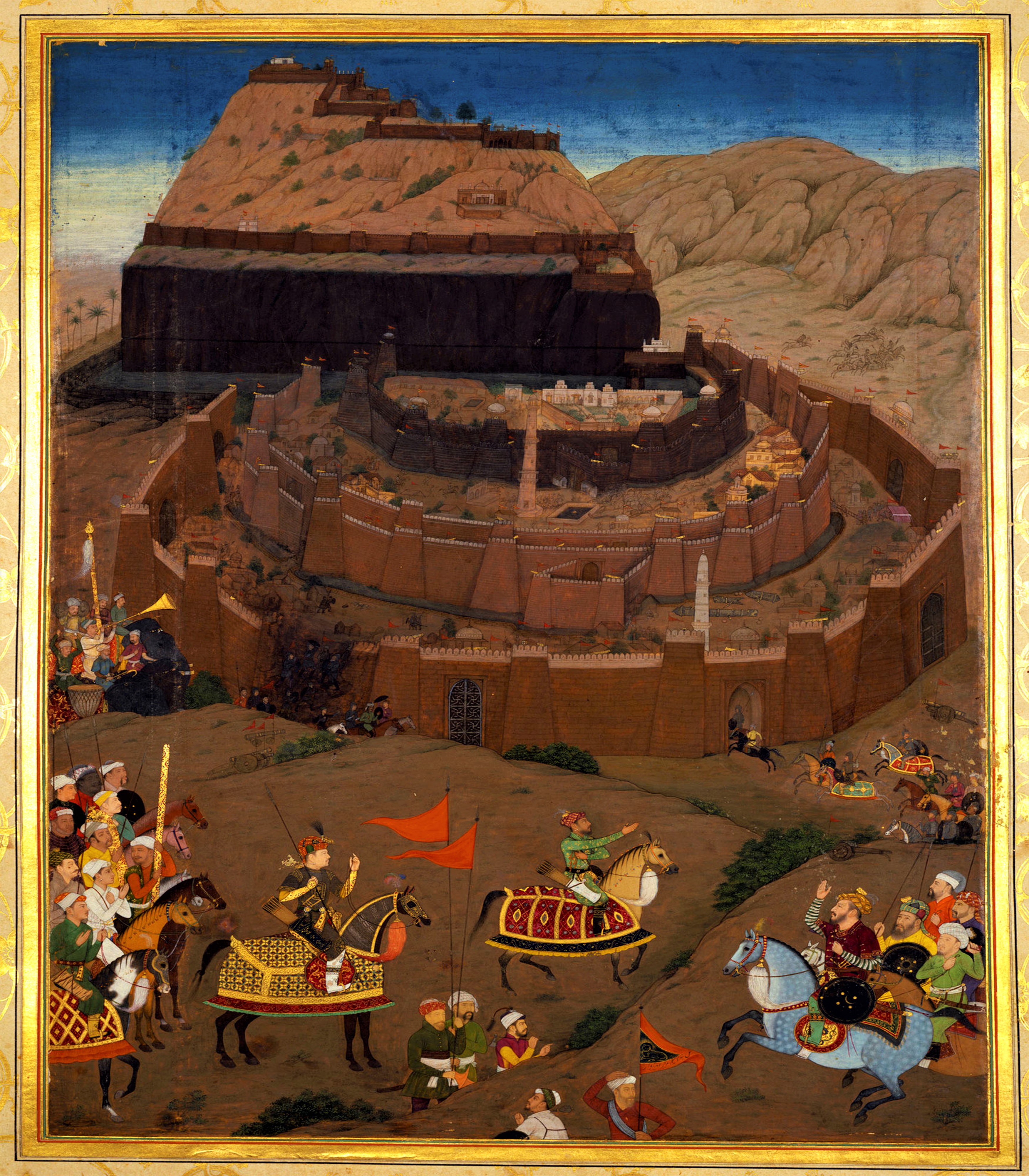 Siege of Daulatabad (27th Jun 1633), an illustration by Murar from the Padshahnama (1636) of Shah Jahan: This bird's-eye view is one of the most impressive topographical illustrations in the Padshahnama, where Murar provided a summary of events that took place over a period of time during the siege. The Mughal flags are already flying from the parapets indicating Mughal occupation of the fort. A portion of the outer wall of the fort has fallen down (centre left). The Mughal military commanders Khan Dawran (on the grey horse to the right) and Mahabat Khan (Khan-i-Khanan), the Commander in Chief of the Mughal forces (at the left), are yet to enter the fort. (Royal Collection Trust, London, https://www.rct.uk/collection/1005025-af/the-siege-of-daulatabad-april-june-1633)

During this time, Aurangzeb was placed as viceroy of Deccan to expand Mughal Empire in the Deccan area. Aurangzeb’s headquarter was Daulatabad, from where he led his campaigns against Bijapur and Golconda. Daulatabad continued to be under the Mughals during the reign of Aurangzeb. Aurangzeb built Chini Mahal, a VIP prison inside the fort. Abul Hasan Tana Shah, the last king of the Qutb Shahi Dynasty of Hyderabad was kept there. Shambhaji Maharaj, son of Chhatrapati Shivaji Maharaj was also imprisoned in the Chini Mahal. Later, Shambhaji was brutally tortured and killed. The Mughal influence in the Deccan region, however, didn’t last too long and after Aurangzeb’s death the region was carved up among the Marathas and the Mughal successor states.

THE MARATHAS & THE NIZAMS OF HYDERABAD

When Mughal power got substantially reduced in the Deccan, the Daulatabad Fort passed into Maratha hands for a brief period. After that it was captured by the Nizams of Hyderabad in 1724 CE. The importance of Daulatabad Fort was subsequently reduced, however, it remained officially under the control of the Nizams till the Independence of India.

That brings us to the end of the remarkable 800-year history of the fort. We should recognize that Daulatabad was much more than just a fort. It represents human history, migration, social mobility and ambition. It is rather a palimpsest that subsequent kingdoms, warlords & armies have carved for centuries to create overlapping layers of architecture, myth and history.