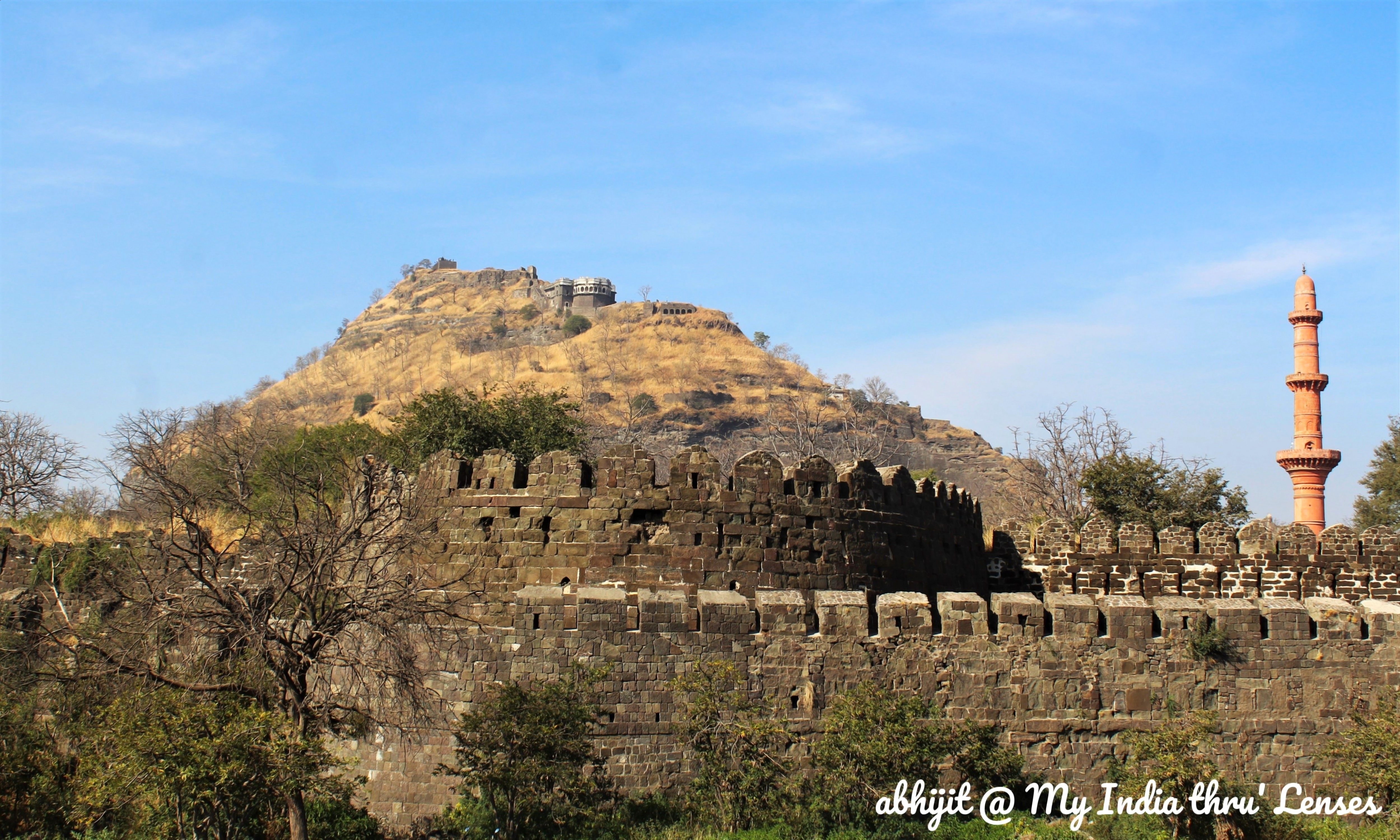 Daulatabad (aka Devagiri) Fort is a rock-hewn medieval era fort located at a distance of 14 kms from Aurangabad in the state of Maharashtra, India. Believed to be invincible, the Daulatabad Fort used to pose a tough challenge to the warlords & armies of various dynasties who wished to capture it, nevertheless, its possession was carved by most powerful dynasties ruling between 12th – 18th century, such as, Khiljis & Tughlaqs of Delhi Sultanate, Bahamani rulers, Mughals, Marathas and finally the Nizams of Hyderabad. Today, the 800-year-old fort throws a challenge to the tourists who dare to scale it. A view from the top of Daulatabad fort has to be earned as it takes climbing close to 700 steps. The fort appears on your left-hand side roughly half-way as you drive from Aurangabad towards the Ellora Caves. The Daulatabad Fort complex is currently maintained by Archaeological Survey of India (ASI).

The earliest records reveal that Devagiri (literally meaning ‘Hill of the Gods’) was a small settlement that lied on an important caravan route for the travellers. In 12th century CE, Devagiri became capital of the Yadava dynasty and the Devagiri Fort was constructed in order to guard the capital city against invasions. Since then, the fort has witnessed several raids, sieges, wars and changes in ownership across a descent of time as long as 800 years. Because of its strategic location and strong protective defences, the Devagiri fort was almost an invincible fort of medieval era, however, ownership of the fort was a matter of pride, prestige and might. Names of several prominent historical figures are associated with Devagiri Fort, such as, Ala-ud-din Khilji, Malik Kafur, Mohamad bin Tughlaq, Akbar, Shahjahan, Aurangzeb, Chhatrapati Shivaji Maharaj and his son Shambhaji. Thus the fort is a treasure trove of information for those who are interested in history.  Mohamad bin Tughlaq, the ‘Sultan of Swing’, changed the name of ‘Devagiri’ to ‘Daulatabad’ (meaning ‘Adobe of Wealth’) and transferred his Capital from Delhi to Daulatabad for a certain period of time. Nizam of Hyderabad was the last official ruler who held the Daulatabad Fort until 16th Sep 1948. 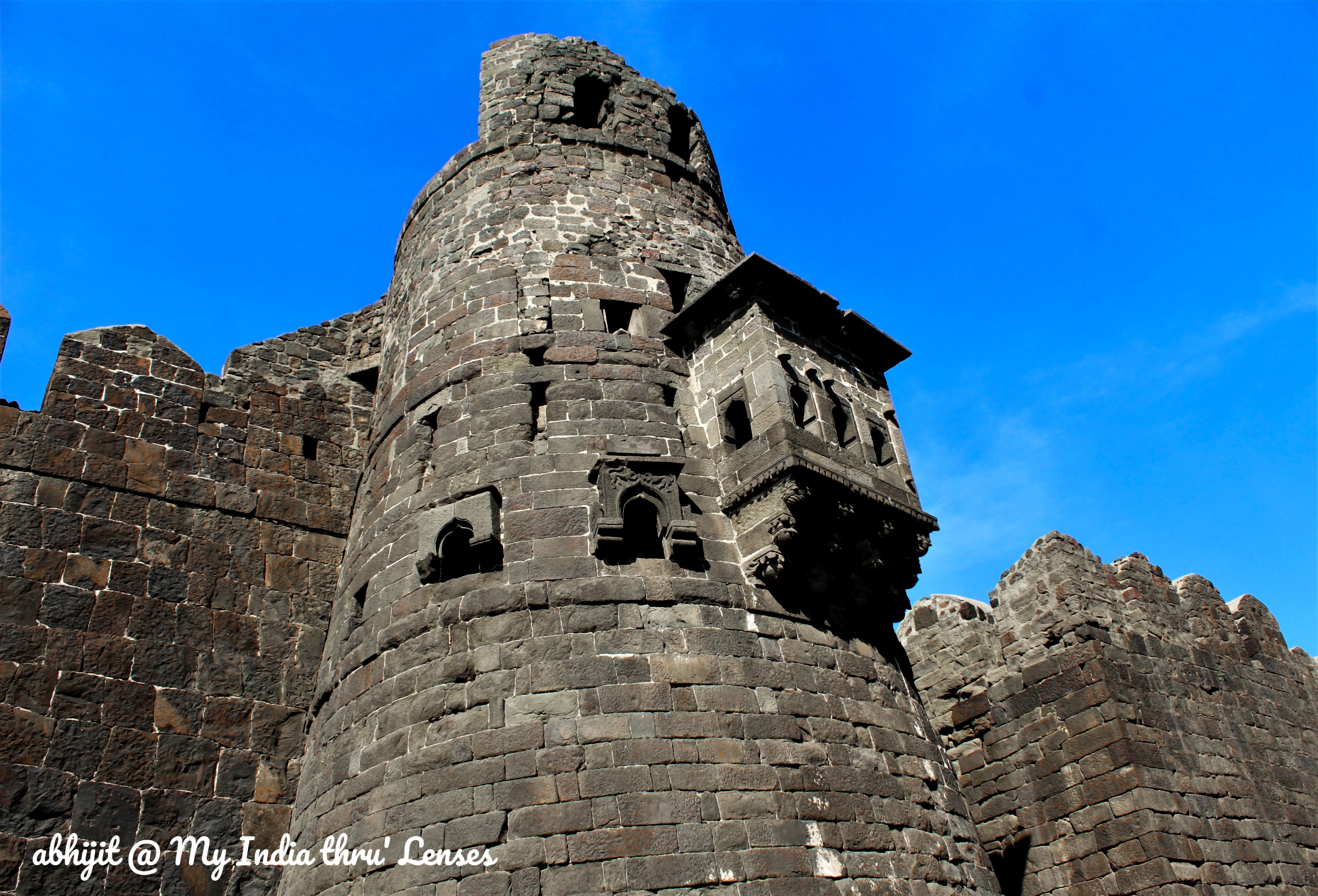 A Watch Tower at Daulatabad Fort

LAYOUT & ARCHITECTURE OF THE FORT

The fort was spread over an area of approx. 95ha encompassing a 200-meter-high pyramid-shaped hill. It represented a unique combination of military engineering, amazing town planning and architectural marvels.

The entire area inside the fort was divided into small sectors encircled by fortification walls. Ambarkot area was for the common people. The Mahakot, having four distant lines of enclosure walls, served the residential area for higher class of the society. Kalakot was the royal residential area with double line of fortifications. The Balakot was the pinnacle portion where the flag used to flutter. The fort included various structures like stepped wells, reservoirs, towers, hammams (bathes), temples and mosques. The water management system was unique with a network of terracotta pipe lines & drains. With change of ownership from one dynasty to another, the fort underwent several rounds of additions & alterations in the subsequent periods.

The formidable defence system that made Daulatabad virtually invincible consisted of: 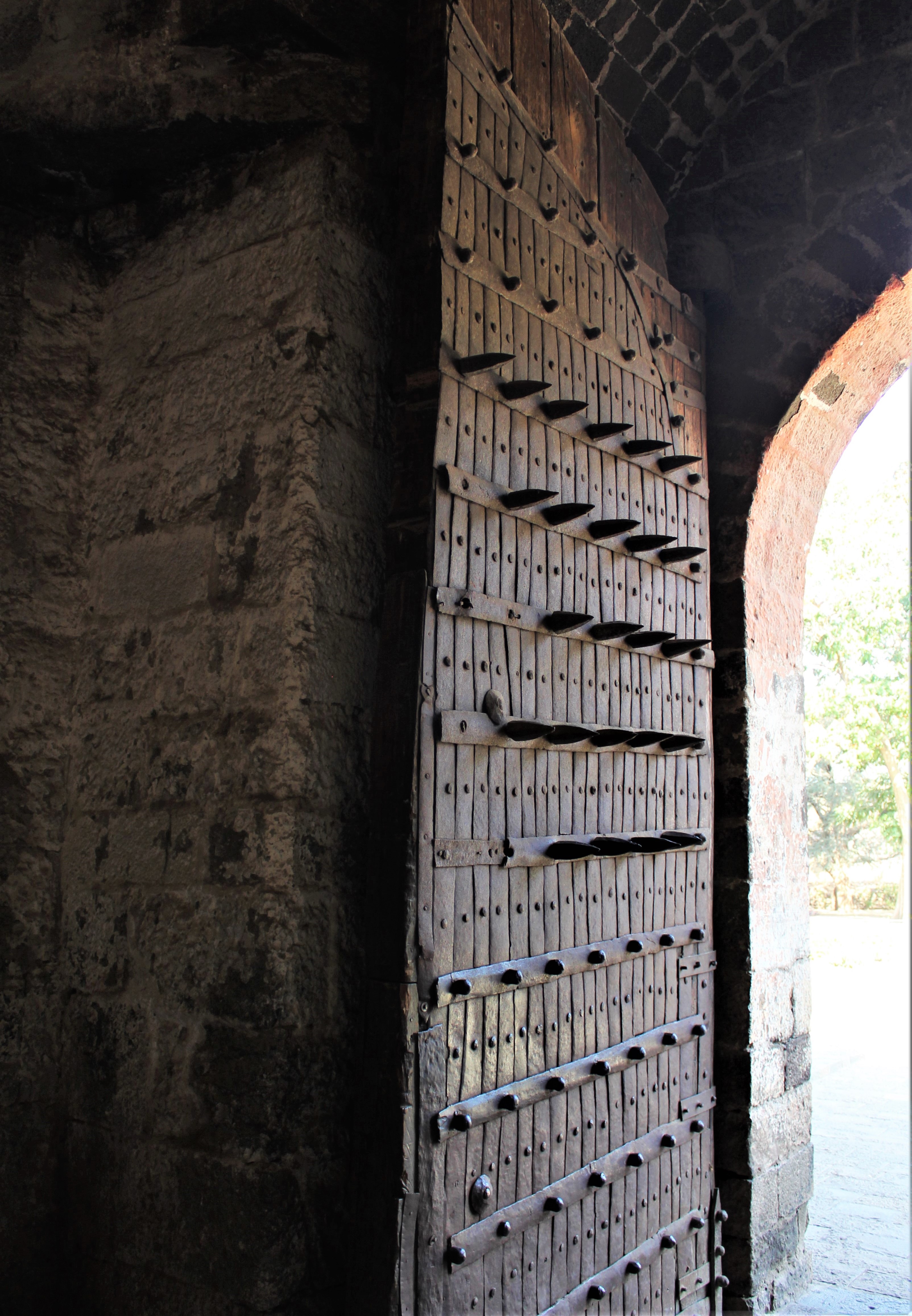 A Lofty Gate with Iron Spikes 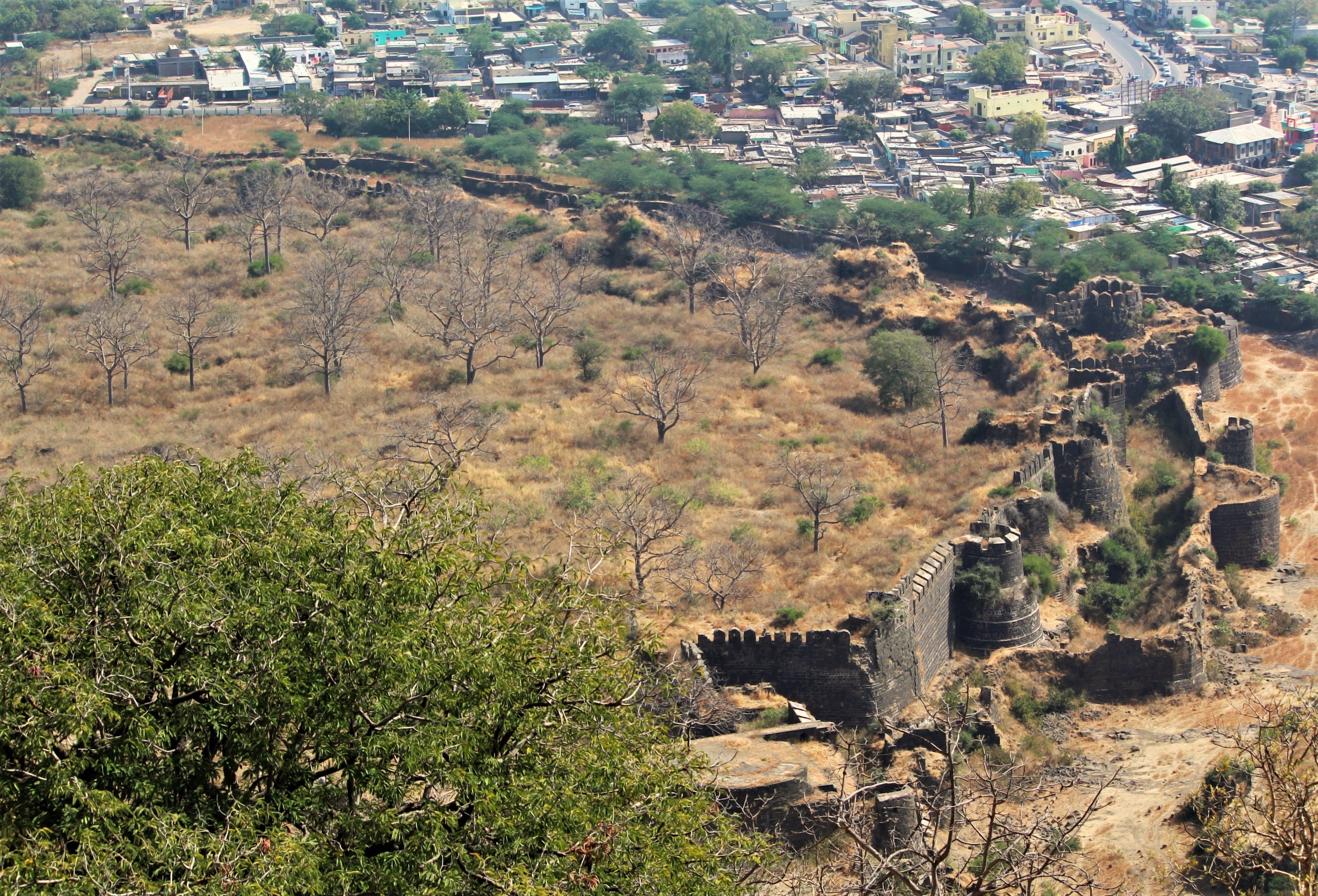 Remains of the Massive Fortification Walls

Any intruder to the citadel had to pass through Andheri, a serpentine & devious dark passage that was practically impenetrable. The long, maze-like passage ascends rapidly & tortuously by a series of steps, uneven in width & height, making it extremely difficult to climb in the absence of light. It contains several hidden chambers that used to be guard rooms. The passage was also infested with several traps for the intruders. If you enter the passage, you will see a window, now covered with grills, but was originally a trap set for intruders, who, would fall down the slope to meet a watery grave in the trench below. In addition to that, there were arrangements to infuse smoke and splash hot water from above. It was, thus, next to impossible for any intruder to pass through the Andheri and enter the citadel. Tourists, who don’t want to go through the tunnel, can use an alternative route through the courtyard that was constructed by the authorities in 1952 for convenience of the tourists. Tourists who want to experience the tunnel must take the help of a guide. 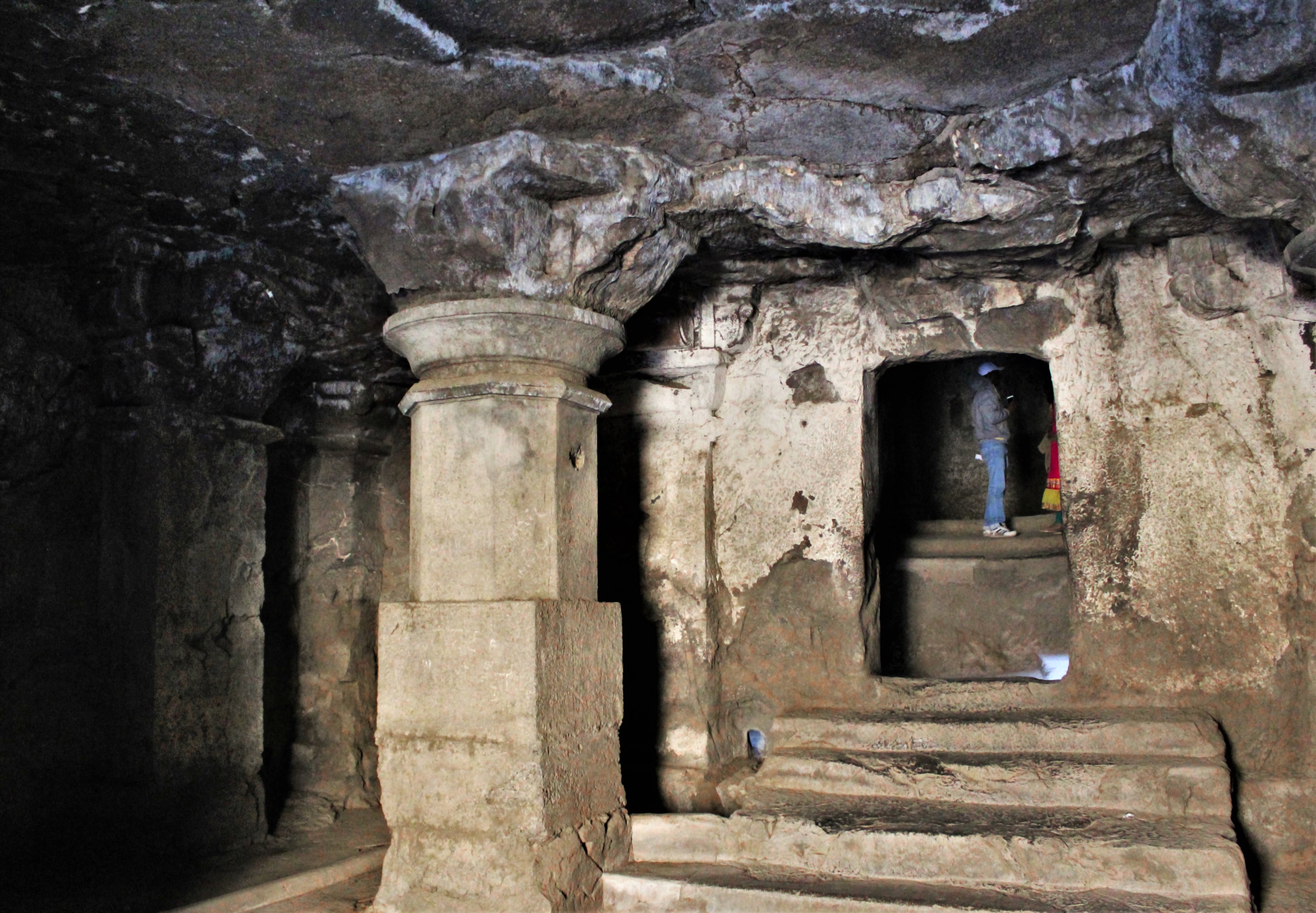 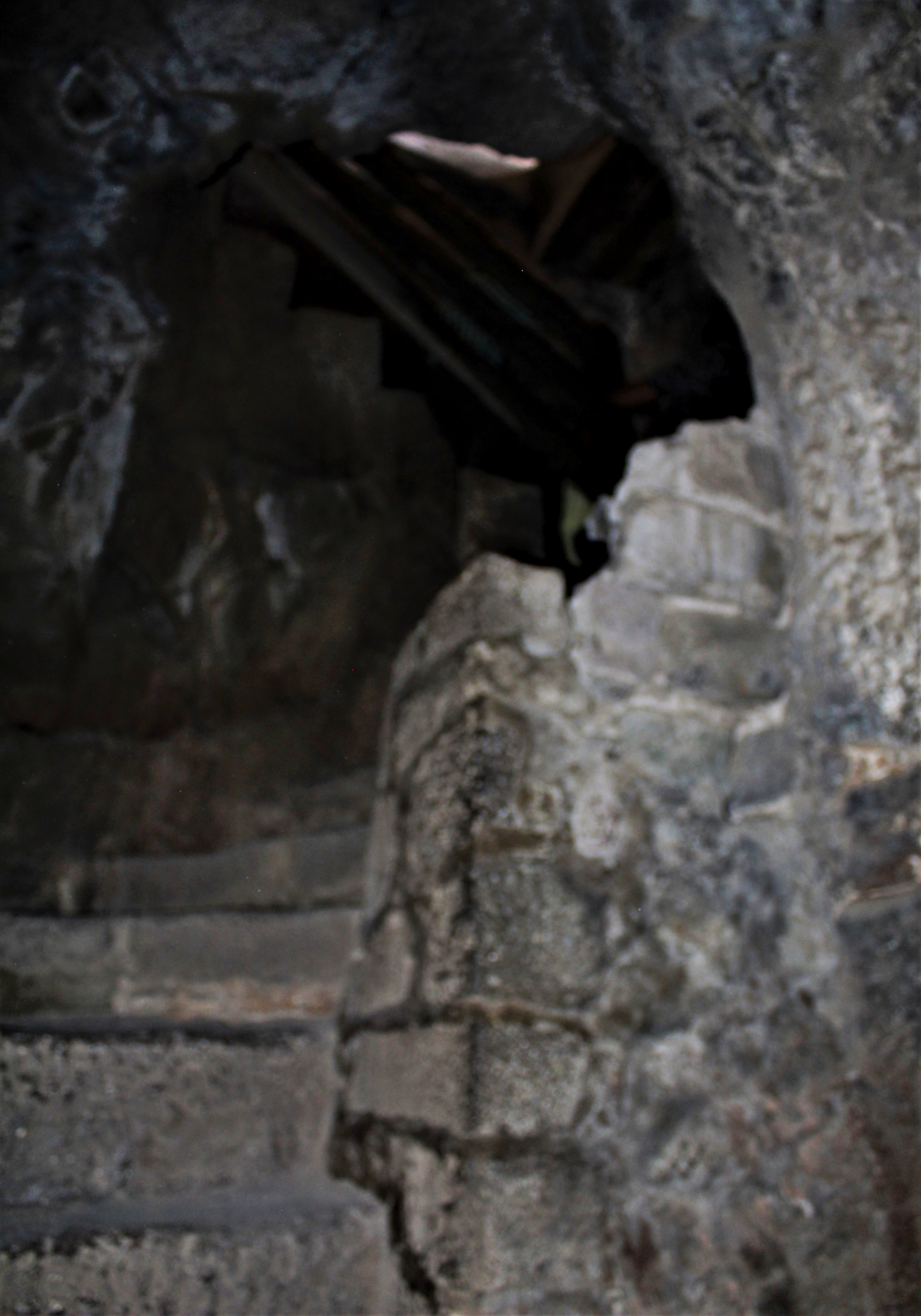 "Owing to its strategic location & formidable defence system, the Daulatabad Fort was believed to be invincible, yet, its possession was carved by most powerful dynasties ruling between 12th – 18th century"

The obvious question that now comes into the mind: If the fort was invincible with such a formidable defence system, how it was sieged & captured several times? How did Ala-ud-din Khilji invade Devagiri in an era when there was no gunpowder? How the ownership of the fort changed from the Khiljis to the Tughlaqs to the Bahmanis of the Deccan followed by the Nizam Shahis? How did the Mughals capture Daulatabad? There is a single answer to all the questions - treason and forgery.

"Historically, the Daulatabad Fort is said to be occupied only by treachery"

Read the fascinating History of Daulatabad Fort in Part II of the Article: the raids, sieges, wars and all other incidents that took place here during the medieval era were no less than fictions.

OTHER MUST-SEE STRUCTURES INSIDE THE FORT 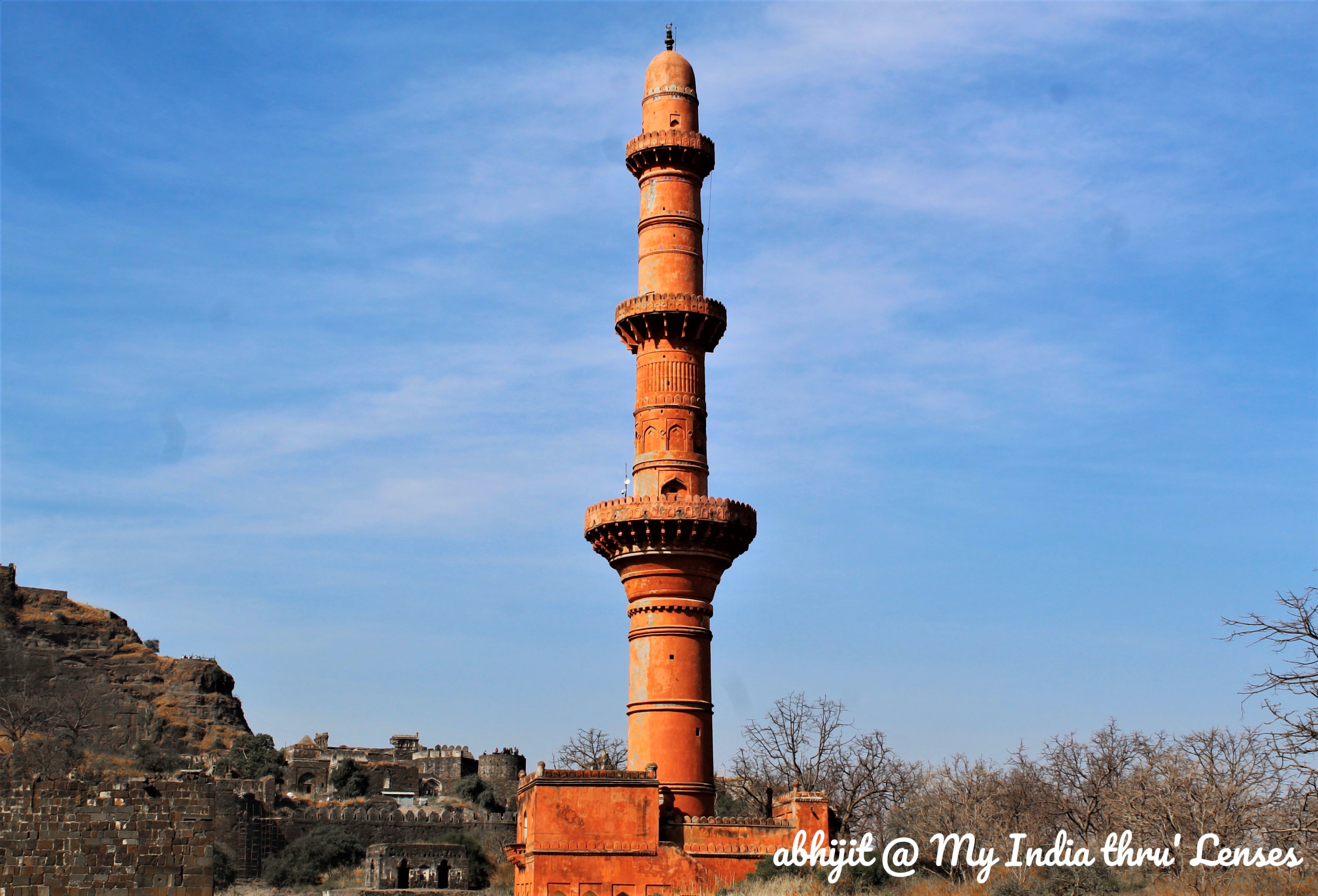 The Chand Minar was constructed by Sultan Ala-al-din Bahman Shah (Ahamadsha-II) after his victory over Gujarat in 1435 CE. The 65-meter-high tower is the second tallest after Qutub Minar in Delhi while the Charminar in Hyderabad is the third largest tower in the country. The four-storeyed Chand Minar was constructed by stone and decorated with coloured tiles, which are still found on the wall. Inside the tower there is a spiral staircase that goes to the top. Since 1990, the authorities have prohibited public entry inside the tower as the tower was becoming a popular suicide spot in the area. 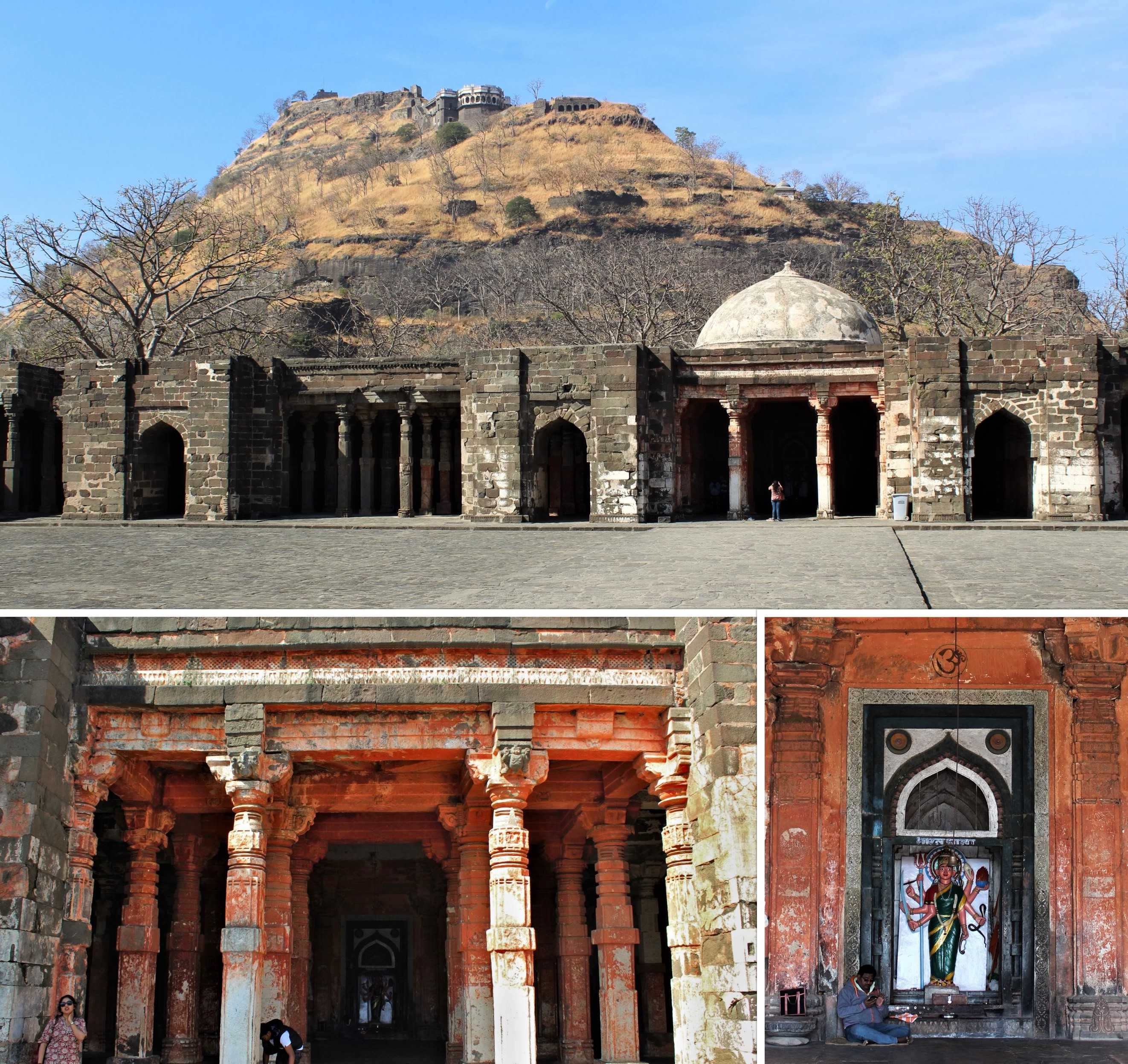 The Bharat Mata temple (temple dedicated to mother India) is one of the oldest and important structures within the fort. According to records, the original temple was converted into a mosque during the reign of Qutb-ud-din Mubarak Khilji. Later, the authorities decided to install the idol of Bharat Mata in the temple, to avoid any controversy. (What the uncultured & barbaric bigots did during the medieval period, you can’t even question them. Otherwise, there will be controversies).

Cannons were invented in Europe in the 12th century. Within a very short period of time, cannons appeared in China and by 13th century the Arab world also started using cannons. In India, however, cannons were used effectively for the first time by Babur in the First Battle of Panipat (1526) against Ibrahim Lodhi, the last ruler of Delhi Sultanate. Since then, cannons have become an important component in the battles. The earliest cannons were made of bronze. In the late 16th century, the Europeans introduced iron (both wrought & cast) cannons in India. 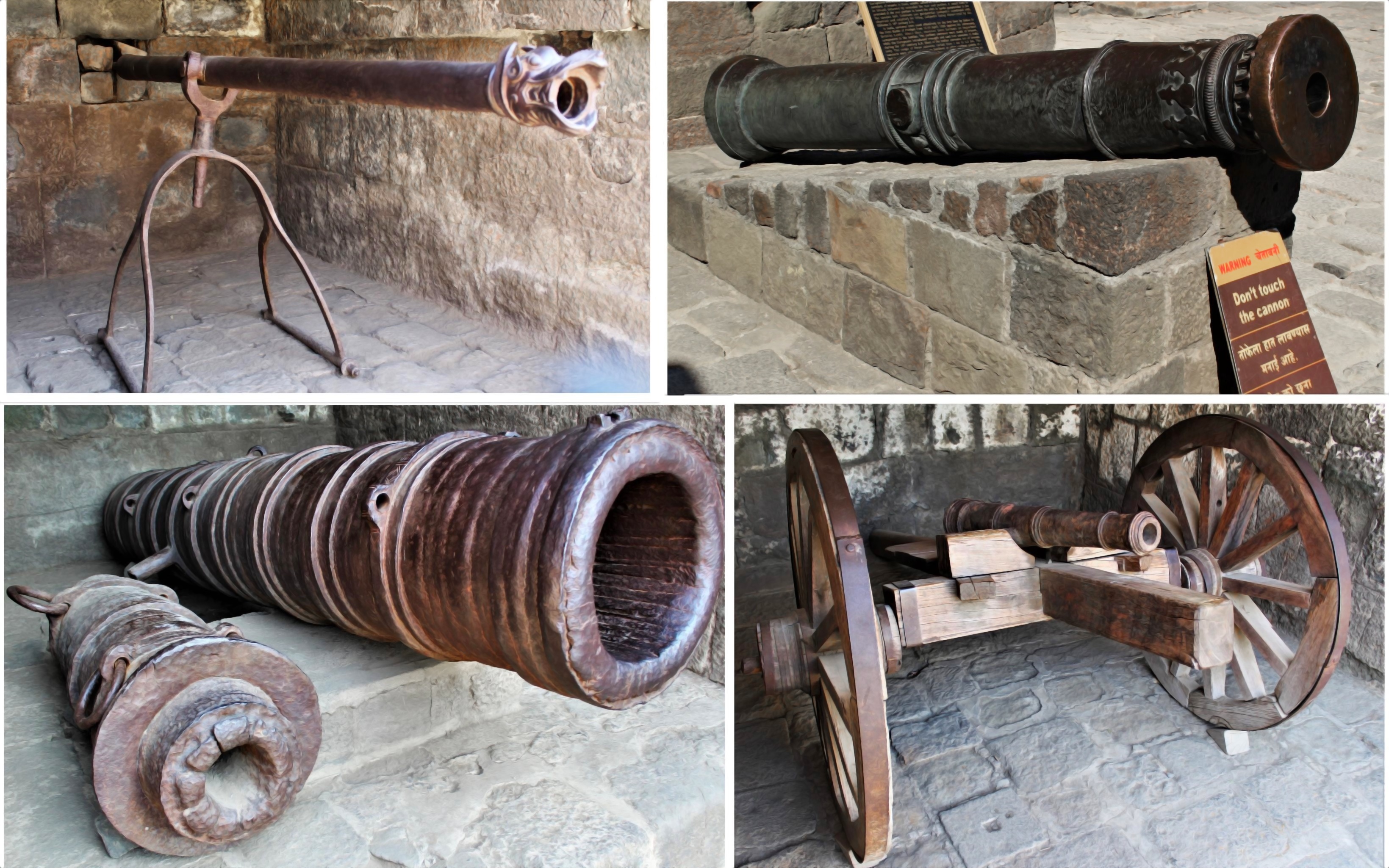 At Daulatabad Fort, you can see collection of bronze as well as iron cannons that range from large heavy guns to medium howitzers & handguns. Apart from indigenously made cannons, the collection includes two bronze cannons, which were cast in Amsterdam is 1638 and 1642. Some of the cannons are kept at their original places, like bastions on fort walls and circular towers, while others, collected from various places, are displayed in the courtyard near the entrance gate and Aam Khas gate. The Mendha cannon (Ram Cannon) is the largest piece of artillery in the fort placed near Chini Mahal. Other noteworthy cannons include Durga cannon and Kala Pahad cannon. 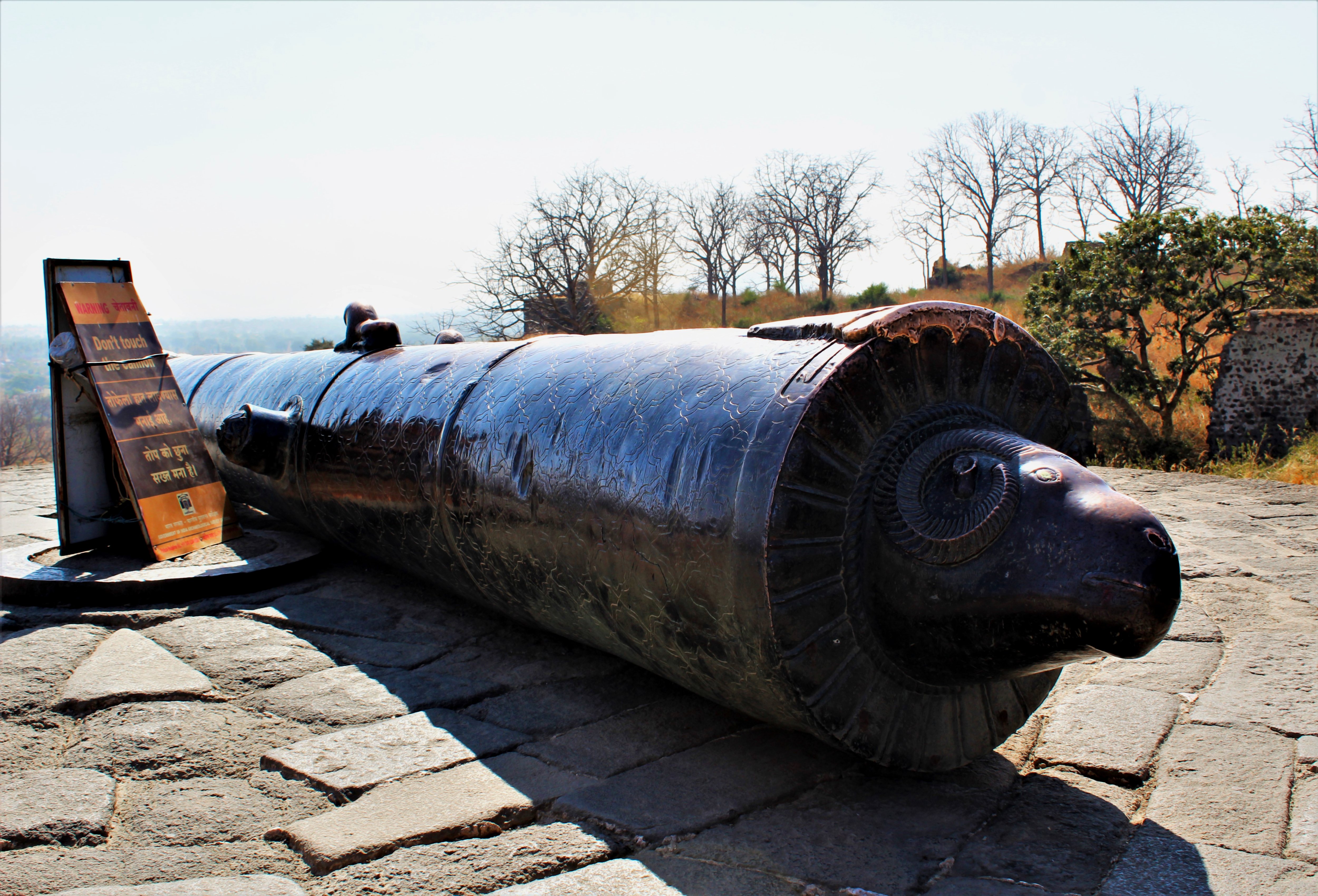 The Mendha Cannon placed atop an elevated circular structure. It is said that the cannon, weighing a few tonnes, was cast in-situ, as it was difficult to move such a heavy weapon. The name of the cannon is derived from the cascabel, which is in the form of a ram. According to inscriptions on the cannon, it belonged to Mughal Emperor Aurangzeb and was called Tope Qila Shikan (destroyer of forts). It was built by Muhammad Hussain Arab. 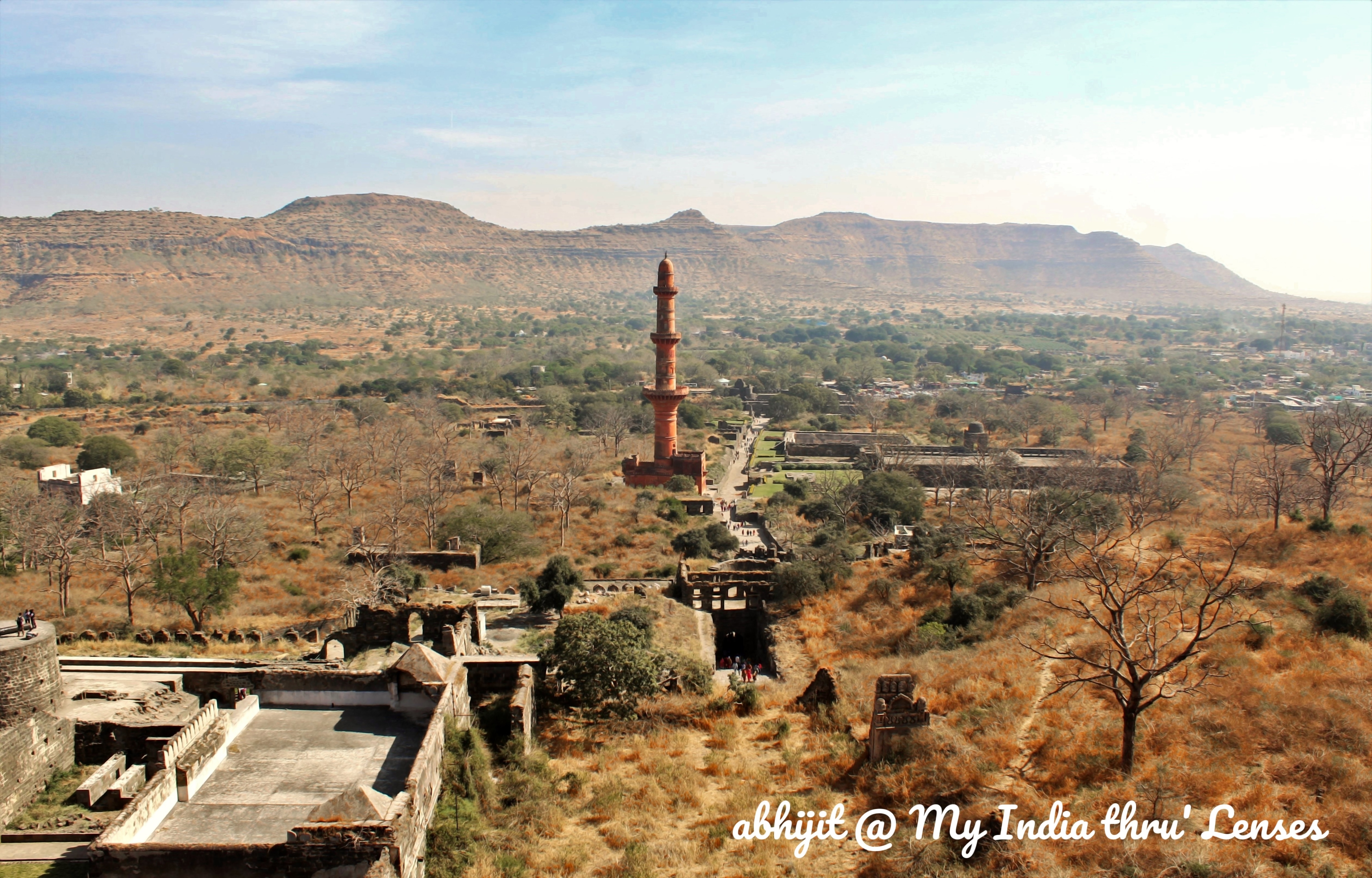 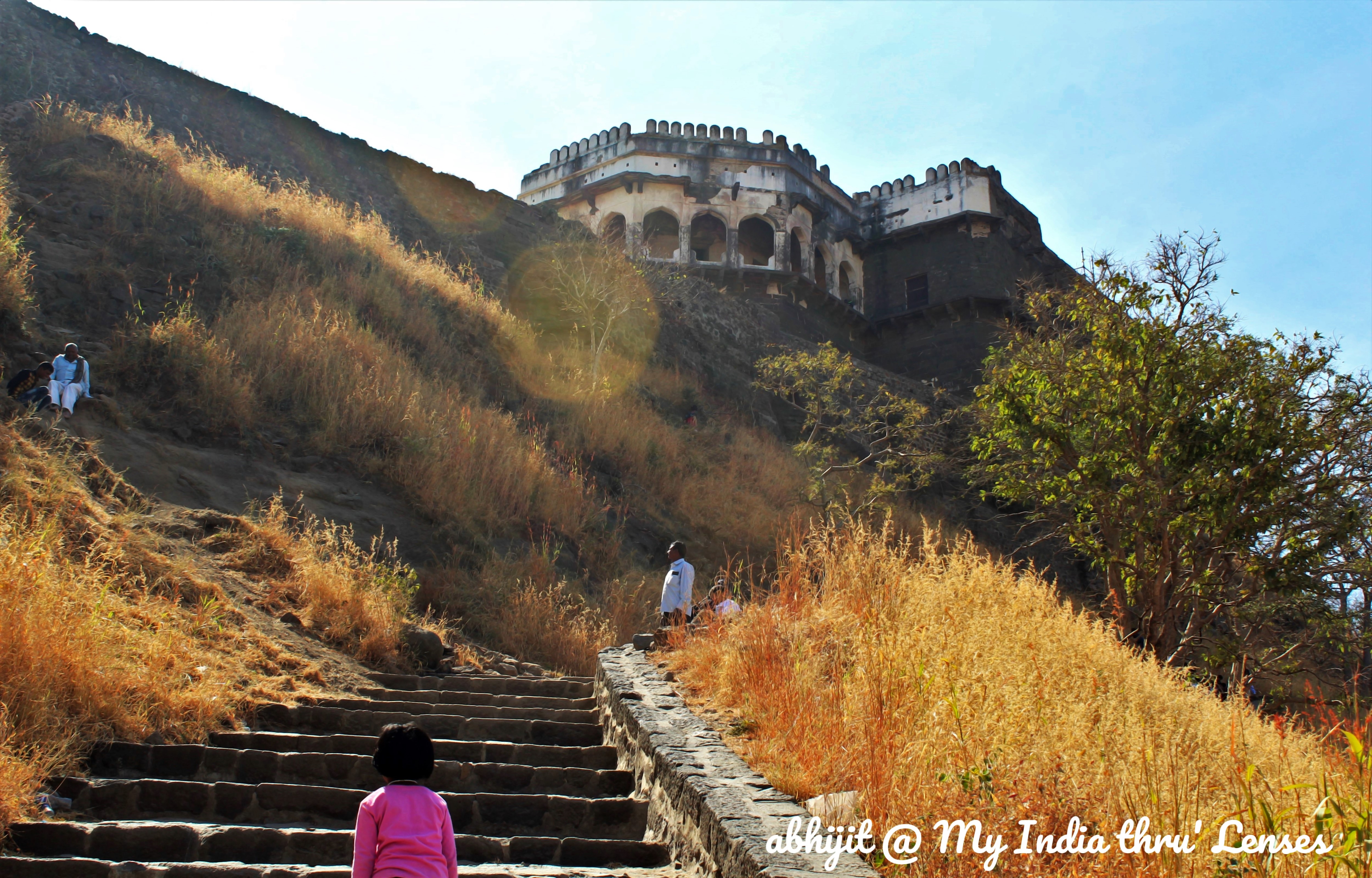 Yet to reach the Summit...another 100 steps or so 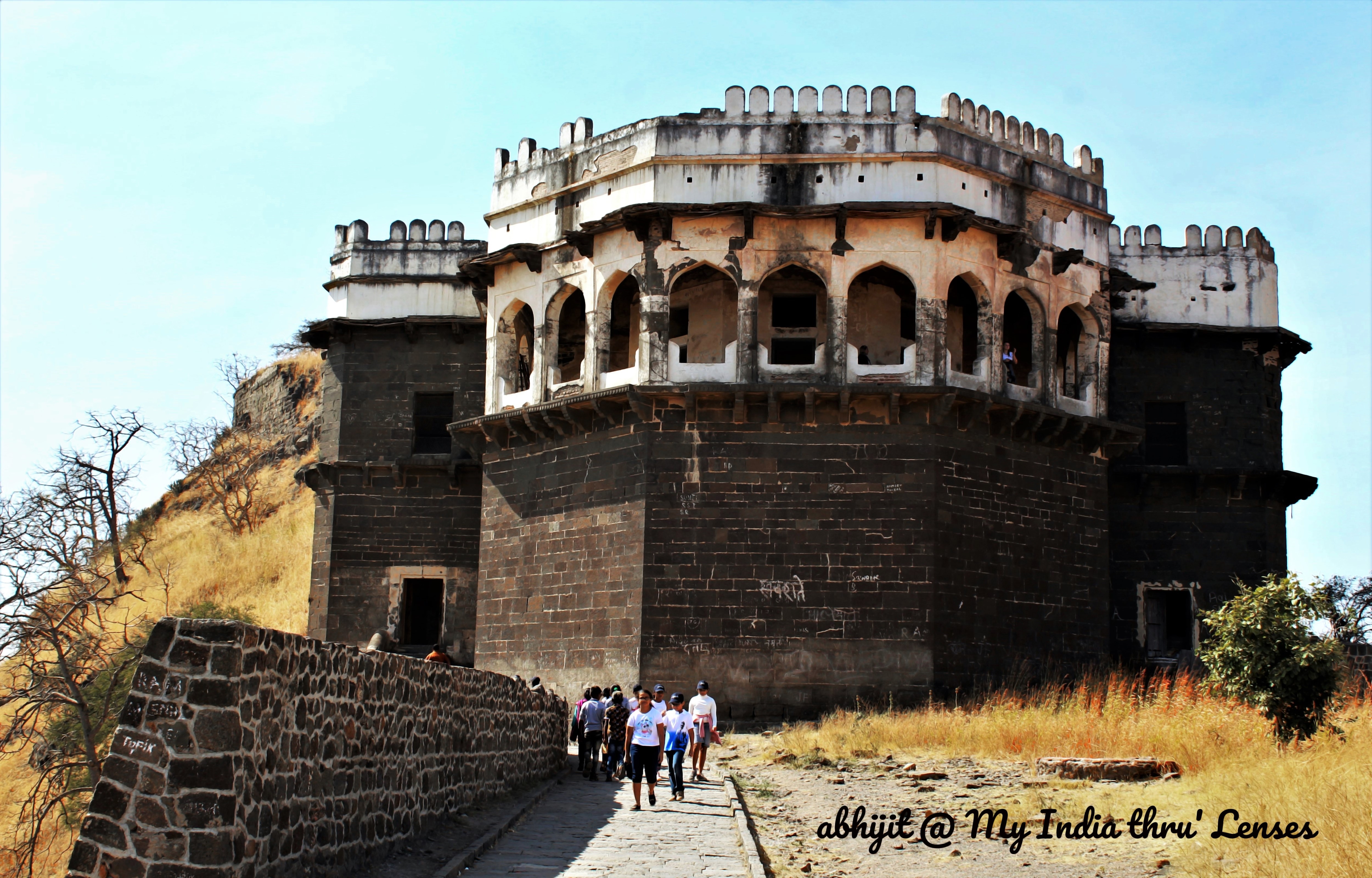 The Baradari is an octagonal-shaped building that stands near the summit of the fort. It was the summer residence of the Mughal emperors. Built in 1636 CE, perhaps, for Shah Jahan's visit, the Baradari consists of 13 halls. The building looks very attractive from the bottom. When you reach there, you can enjoy the awesome panoramic view from the top. However, you have to climb close to 700 steps to reach there. 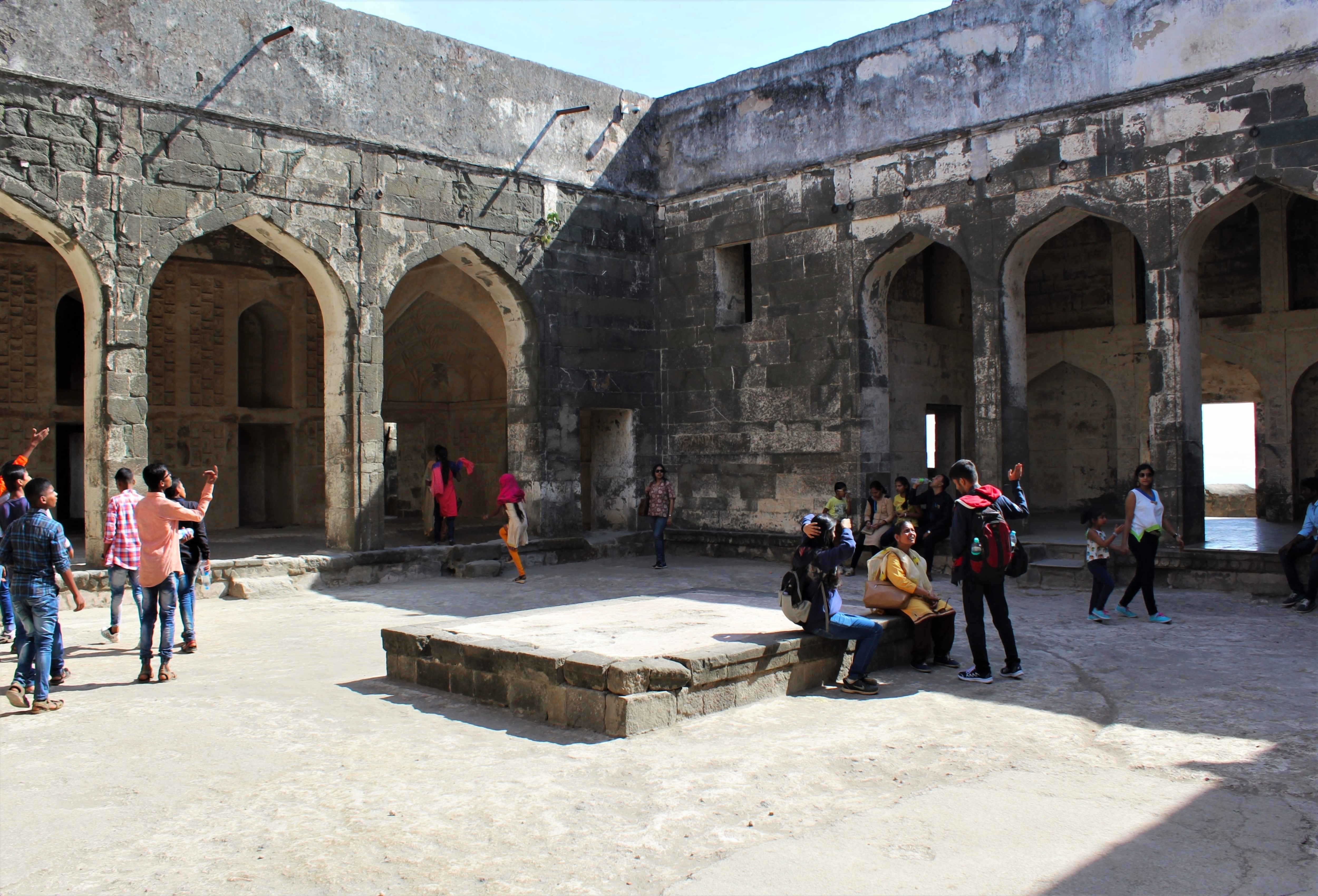 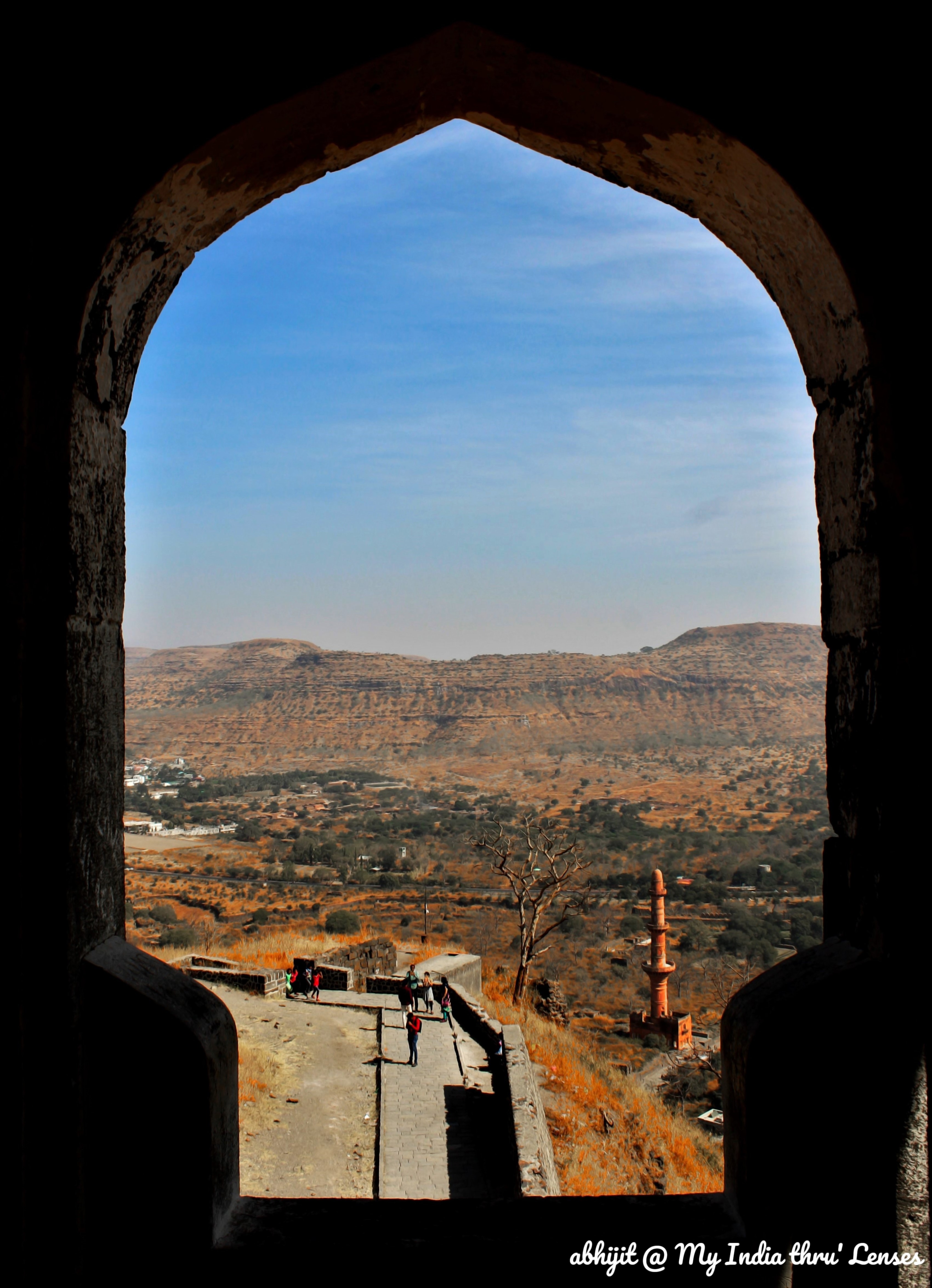 Panoramic View from the Baradari 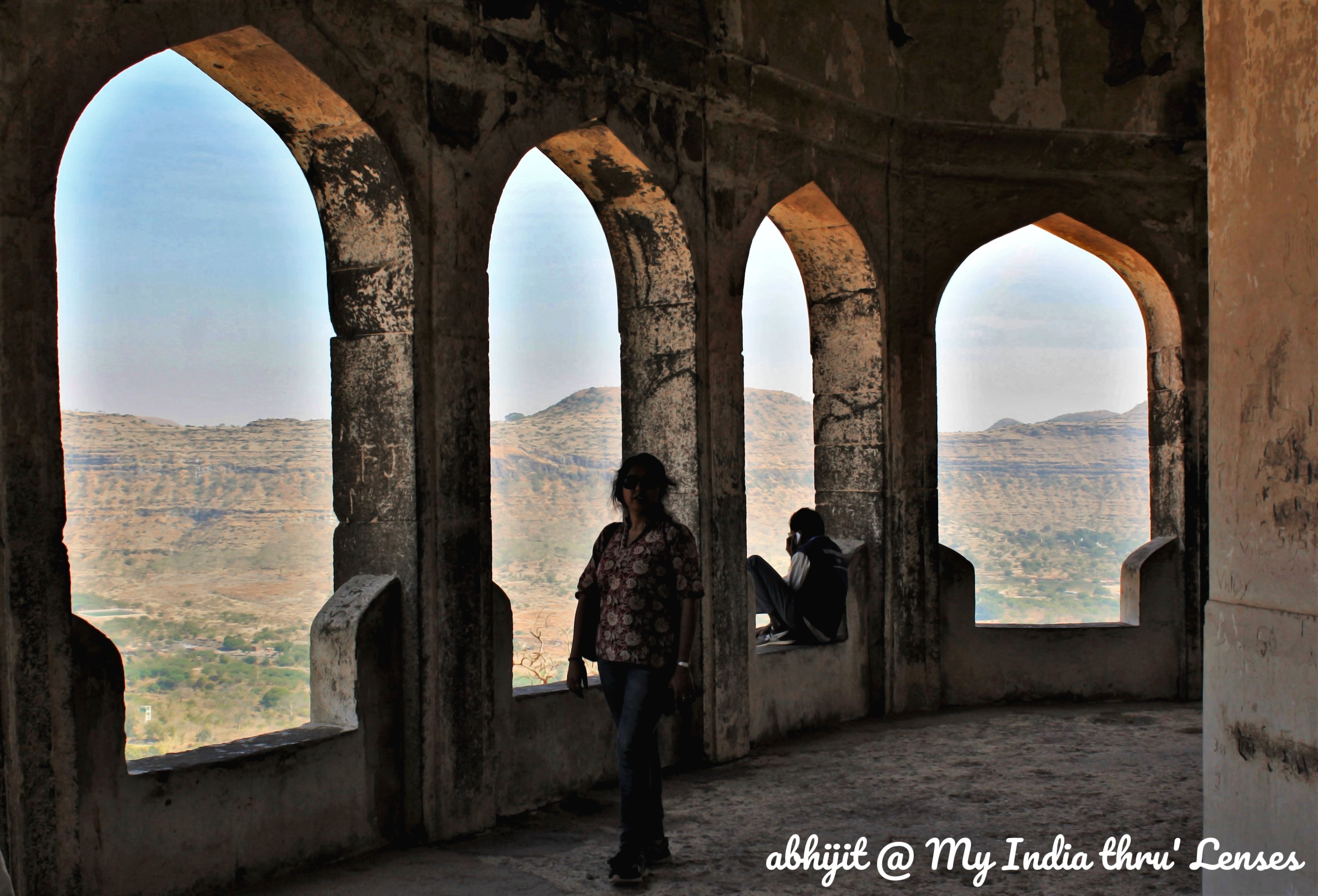 On an average, 3-4 hours are required to see the entire fort, if you choose to go right up to the top climbing all the steps. So, you need at least half-a-day for this place. Since the fort lies on the highway route from Aurangabad to Ellora, many tourists choose to visit both Daulatabad and Ellora on the same day. The travel operators also advice the same. However, my suggestion is to visit these places on separate days, even if you have to travel through the same route twice. Ellora caves will also take 5 hours or more and you may run out of time.

We took a cab from Aurangabad around 9.30 am, reached Daulatabad in 20 minutes, purchased ticket and entered the fort by 10.00 am. We came out of the fort complex by 1.30 pm. After lunch we visited other local attractions of Aurangabad viz. Soneri Mahal, Aurangabad caves etc.

Read the full travel plan here: Into the Mysterious Caves of Ajanta & Ellora

There are many restaurants & dhabas on both sides of the highway near the fort complex. We had our lunch with misal pav & lassi in a dhaba just opposite to the fort. 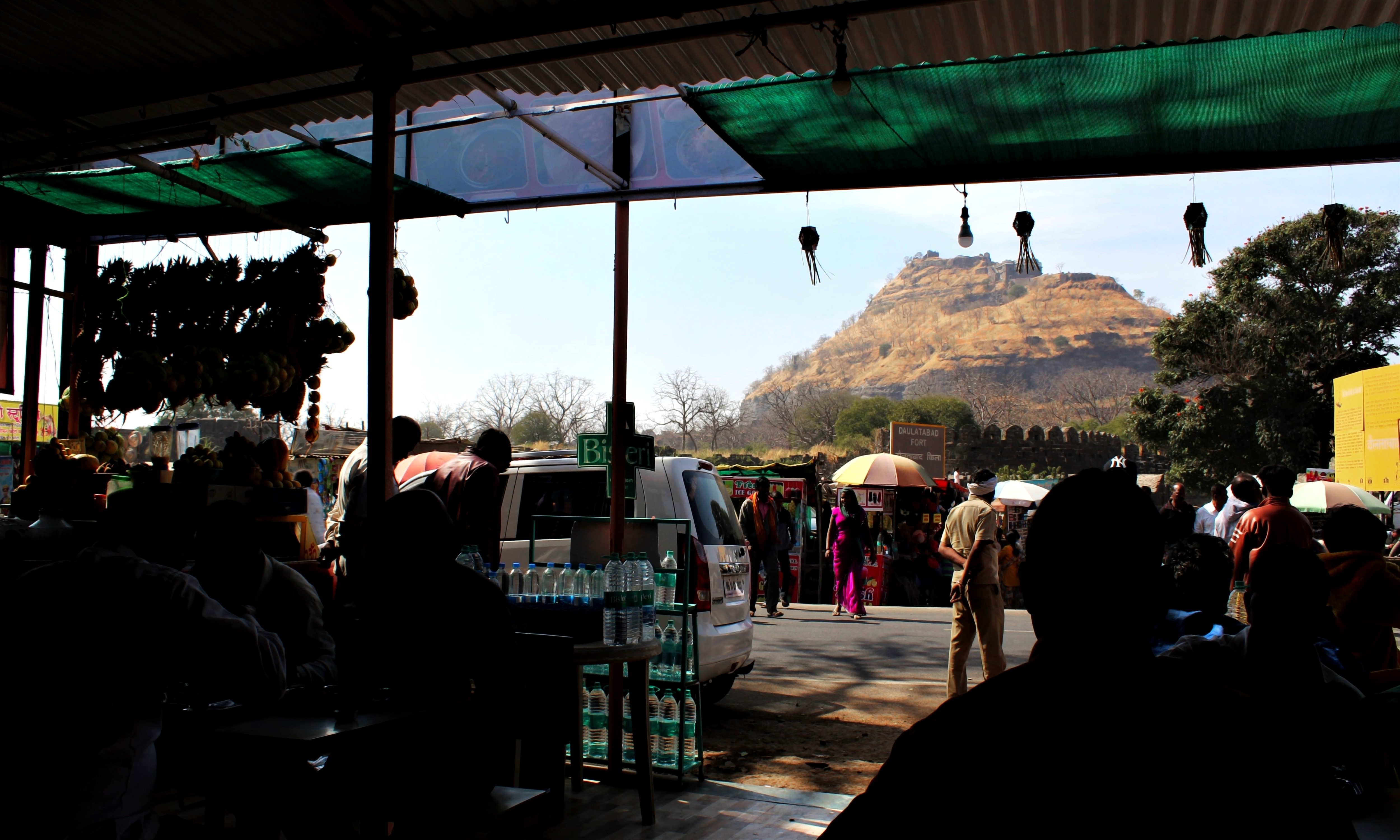 Lunch at a Restaurant just opposite to the Fort

As already said, Daulatabad lies half-way between Aurangabad and Ellora. You can make your staying arrangements either in Aurangabad or in Ellora. It takes less than 30 minutes to reach Daulatabad from either of these places.

Winter (Nov to Feb) is the best. Winter is pleasant in this part of the country, when the minimum temperature drops down to 10°C. The maximum remains around 25°C. It’s better to avoid the Summer (Mar to Jul), when temperature ranges between 25 - 40°C making it too difficult to roam inside the fort and climb the rocky steps.

(It is recommended that you confirm Timings and Charges before going, because these keep on changing)

Read the fascinating history of the fort: Part II - The Medieval Era Fort at Daulatabad: A Treasure Trove for History Lovers